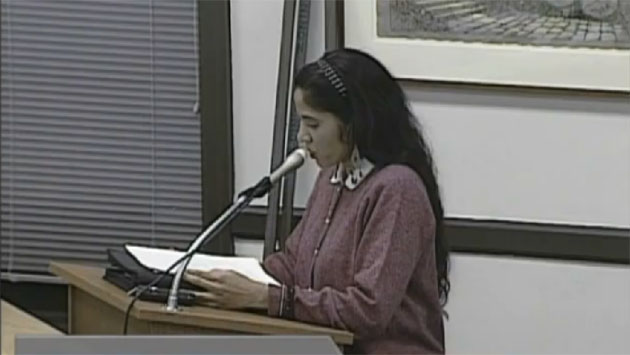 Folks who like to bend the ears of Evanston aldermen about items that aren't on the City Council's agenda may soon have to stay up later on Monday nights.

Padma Rao speaking at the Monday, March 26, City Council meeting against the Kendall rezoning decision made a year earlier (from the YouTube video).

Folks who like to bend the ears of Evanston aldermen about items that aren't on the City Council's agenda may soon have to stay up later on Monday nights.

The City Council's Rules Committee tonight is scheduled consider a proposal from city staff to add 15 more minutes to the 45 minutes allocated for citizen participation at City Council meetings.

But the additional time would come at the end of the meeting, after all other business is concluded.

And, if the revisions are adopted, the time at the start of the meeting would be reserved for people speaking on topics that are on that night's council agenda.

Aldermen would also be free to respond with follow-up comments, feedback and discussion during the new "citizen forum" at the end of the meeting.

The rules that now limit aldermen to "requests for information, referrals to the appropriate committee, or to the City Manager for response" would continue to apply to the citizen comment period at the start of the meeting.

The proposal is the latest effort to address concerns about off-agenda comments by speakers at council meetings.

In one example of behavior that's prompted the proposed rules revisions, two speakers have shown up at every council meeting for the past year to complain at length about the council's vote on March 28, 2011, to approve rezoning for the former Kendall College property that may result in some trees on the site being removed to permit construction of single family homes.

They've pledged to keep occupying six minutes of the council's time at every meeting untl the council reverses its vote.