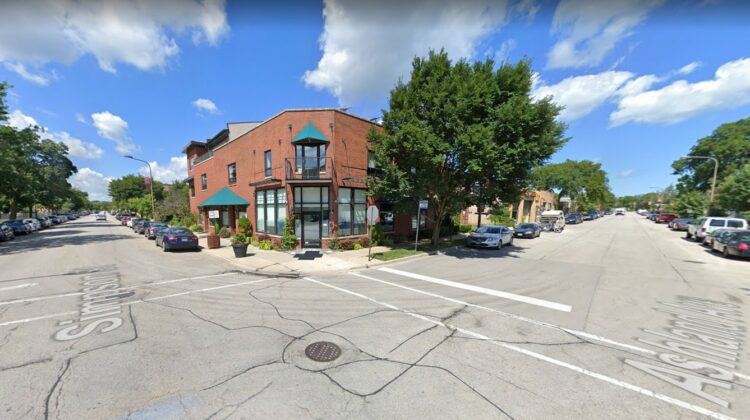 The intersection of Simpson Street and Ashland Avenue. Ald. Bobby Burns (5th) lives in the building on the corner. (Google Maps)

The City Council Monday will consider a request to remove two streets from the list of Evanston’s truck routes — streets that happen to intersect at the home of a newly-elected alderperson.

Ald. Bobby Burns (5th) requested the change, which is being recommended by city staff.

The change would remove Ashland Avenue and Simpson Street from the list of the city’s truck routes along with a two-block stretch of Dodge Avenue.

Burns rents a live-work apartment in a building at 1601 Simpson St., on the corner of Ashland Avenue.

In a memo to the Council, Public Works Director Dave Stoneback says the change in the city’s truck routes would not prohibit trucks from making local deliveries to businesses on the affected streets. But it would prohibit trucks from using the streets as a route to other destinations.

Most of the immediate area that would be affected by the change is zoned MXE or Mixed Use Employment District, which the city code says is designed for areas in the city “where manufacturing and industrial uses have coexisted with residential uses in a manner in which neither have been affected adversely.”

Update 7/13/21: The truck route change was approved for introduction on the City Council’s consent agenda Monday night. Final action on the proposal is scheduled for July 26.