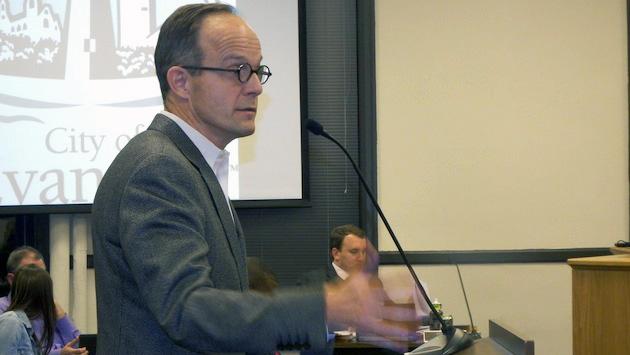 After several hours of public comment and debate Evanston aldermen voted 5-4 against giving the developer of the 708 Church St. tower even one extra year to begin construction.

Initially, developer Tim Anderson had requested a three-year extension for the planned project, which was approved by the council in a 6-3 vote in March of 2009.

But during discussion, Alderman Ann Rainey, 8th Ward, suggested trimming it to a one-year extension instead, saying she believed the developer should "be in a position to describe to us the planned project" in a year's time.

When the it was first approved in 2009, Anderson, president and owner of Focus Development, Inc., was given five years to begin construction on the planned 35-story tower, instead of the usual three, because the real estate market was in a slump.

The proposed tower was controversial when it was debated five years ago and time has not changed that.

Nearly 20 residents, many of whom live in the Sherman Plaza tower at 807 Davis St. and whose skyline views might be impaired by the new building, spoke at both the council's Planning and Development Committee meeting and subsequent full City Council meeting urging alderman to vote against the extension. No one spoke in favor of it.

Though aldermen repeatedly reminded commenters that the issue at hand wasn't approval of the development itself, but approval of a time extension, residents continued to criticize plans for the tower — from its height to its impact on downtown views to the effects of construction on local businesses in the area. 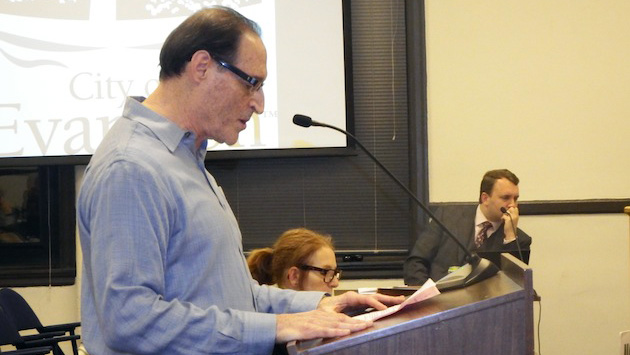 "To put a building that is that massive on that site and that density for that site is a mistake," said Sherman Plaza resident Martin Kantor.

Another Sherman Plaza resident and professor of accounting at the Kellogg School of Management, Allan Drebin said the tower "was a bad business decision" for the city.

Others also noted the length of time that had passed since the initial approval of the project, saying that both the building itself and the public benefits promised by the developer at the time it was approved had grown stale.

Anderson defended his project, citing his company's "track record of delivering quality projects to Evanston," including the development at 1717 Ridge Avenue.

Due to the economic downtown in 2008, development of the project requires additional time, Anderson said.

After being questioned by Alderman Donald Wilson, 4th Ward, it was revealed that Focus Development no longer has a contract to purchase the property from the owners.

When pressed, Anderson's attorney, David Reifman, said the property was part of a land trust.

The proposed time extension was moved to City Council from the Planning and Development Committee without a recommendation for action.

Opening discussion of the item, Mayor Elizabeth Tisdalh ruled that the proposal must be approved by six council votes — a super majority.

Rainey moved to overrule Tisdahl, seconded by Alderman Coleen Burrus, 9th Ward, and argued that there was no "codification in city books" requiring a super majority "for a plain and simple extension."

City Attorney Grant Farrar said initial approval of the plan required a super majority — because it was passed as a special use — and "it became a matter of simple logic" to mirror the requirement of the original approval.

"A [City Code] amendment on the issue is definitely necessary," he said.

Rainey said she'd support such an ordinance if it was proposed, but since it does not currently exist, she had to oppose Tisdahl and Farrar's decision. 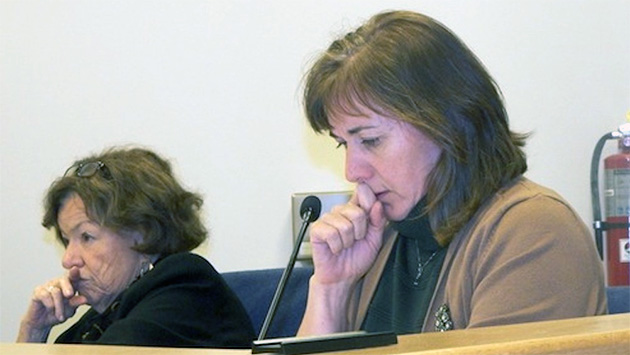 Aldermen Rainey and Burrus ended up on the losing side of the tower extension vote.

Anderson said he was comfortable with the one-year extension, but said his interest in the property would cease if the council failed to grant any extension at all.

Echoing concerns of some of the residents who spoke out about the tower, Alderman Judy Fiske, 1st ward, called the project outdated and irrelevant to current city plans.

"Tim Anderson is not going to build an obsolete building," Rainey said in response to Fiske's comments. "It's not going to happen."

Both Wilson and Alderman Melissa Wynne, 3rd Ward, suggested the developer could alleviate some of the concerns by starting the project from scratch.

Rainey also disagreed with this line of action, arguing instead to "give it a year and if he can't do it let's kill it."

The proposal was ultimately defeated with a simple majority.

All other items on the City Council agenda Monday night, including the city's fiscal 2014 budget, a sanitation fee increase and 10 percent water rate increase for next year, were approved unanimously by the council as part of the consent agenda.