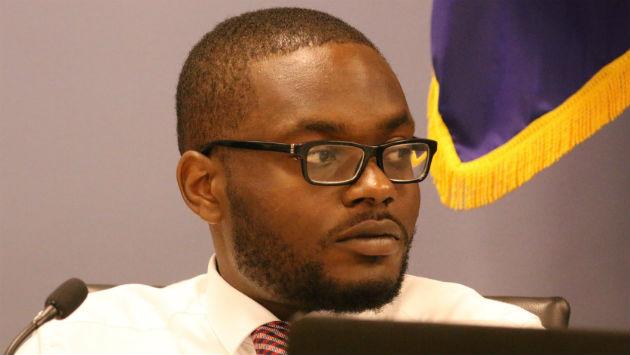 The motion to table, offered by Alderman Ann Rainey, 8th Ward, carried on a 5-4 vote.

During public comment numerous people who have seen Reid as their advocate for gaining more information about city policies that they disagree with spoke in his defense.

They generally ignored or dismissed out of hand the accusations that, in the words of the resolution, he had “inappropriate workplace conversations with city employees, threatening, harassing and retaliating against multiple city employees for, among other items, engaging in protected activity.”

Mike Vasilko argued the City Council should be censured for harrassing Reid. Alyce Barry claimed the only city employees who get threatened with censure have dark skins.

Only Shawn Jones argued that “employees have the right to not be belittled,” and said he knew of at least four people Reid harassed.

Aldermen who supported the censure motion were hampered by a state law that calls for confidentiality for city employees who make complaints of workplace harassment — which, they said, barred them from offering details of the accusations againt Reid.

Rainey, who herself was the target of a failed censure resolution last fall, said the resolution against Reid would serve no purpose and that the complaints listed against him “are rather nebulous.”

But Alderman Don Wilson, 4th Ward, said the Council need to consider “the people who aren’t in the room and have been harmed” by Reid’s conduct.

The Council has to support the employees who have been harmed, Wilson said, adding that Reid needs to take things to heart and improve.

Reid conceded he hasn’t been perfect, but called the resolution an attempt to slander his name.

Alderman Cicelty Fleming, 9th Ward, said she didn’t want to have the details of the harassment of the employees made public — because she’d been the victim of harassment herself.

But it’s important to have a safe and healthy place to work, and to complain about it when it’s not, Fleming added.

By tabling the motion the Council leaves open the possibility of revisiting the censure issue at any future meeting. If the motion were approved it would have no immediate practical impact on Reid’s position, but could serve as a mark against him in a future election campaign.