Bill Patrun of Bristol said the developers of the project at 413-421 Howard St. â€œhave had incredible difficulty getting the project financed and talked to over 300 companiesâ€ since the city first approved the project two years ago before recently nailing down financing.

Marty Stern, the city’s development consultant, said the financing difficulties stem from the lack of significant new construction in the Howard Street area in decades, the unproven market for this type of project and the difficult economics of rental apartments, especially with Cook County’s high real estate taxes.

He said the developer had originally asked for a rebate of all property taxes for the 23-year life of the area’s tax increment financing district, but the city has worked out an agreement to rebate taxes fully for the first five years, and then gradually reduce the rebate percentage, phasing it out completely in the 13th year.

Mr. Stern said the net present value of the forecast stream of real estate tax revenue during the rebate period is $6.9 million. The developer would receive rebates valued at $4 million, with the city retaining the rest. 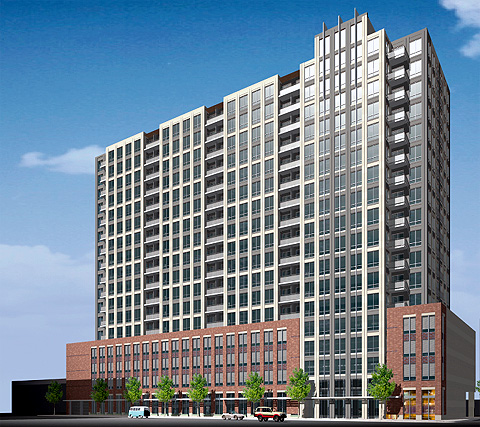 An architect’s rendering of the proposed building viewed from the southeast.

Assistant City Manager Judy Aiello said the city and the developer are still working out details of an agreement with the Chicao Transit Authority.

The issues included redesigning the building’s garage area to help keep possible trespassers out of the CTA yards adjacent to the site and safety concerns regarding construction cranes for the project. Ms. Aiello said she anticipates the agreement will be approved by the CTA board in May.

The committee also agreed to a compromise with the developer on the hiring of minorities, women and Evanston residents to work on the project.

The developer agreed that people in those categories would get at least 25 percent of the work on the project, with at least eight jobs going to Evanston residents.

Mr. Stern said that would be the equivalent of about 20 full-time jobs over the 18-month term of the construction project.

Assistant Corporation Counsel Herb Hill said the agreement will include very substantial penalties if the developer fails to meet the hiring goals.

Ms. Aiello said the city staff is still working out details with the local school districts of plans to increase the city’s payment to the schools under the tax increment financing district for this project.

The project will also involve the city vacating an alley behind the site to give the narrow site more depth and in return receiving from the developer land to create a new alley at the east end of the site to give access to other properties along the block.

The City Council is scheduled to discuss the proposal on Tuesday.