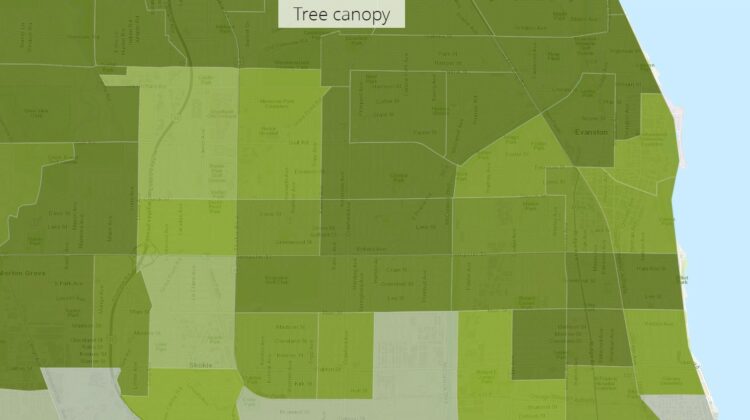 City Council members tonight are scheduled to discuss a tree preservation ordinance that would add thousands of dollars to the cost of construction projects that required the removal of trees.

The discussion comes after the release this spring of a study by the Chicago Region Tree Initiative that indicates Evanston has significantly more tree cover than much of the region, but that some neighborhoods in town — mostly lower income ones — have relatively sparse tree cover.

The CRTI study shows that while Cook County as a whole has 28% of its land area covered by the tree canopy, the average in Evanston is 38%.

After city staff first presented the ordinance to Council in May, the Council voted to table the issue until Sept. 27, but directed staff to come back with a progress report on the subject at tonight’s meeting.

In a memo prepared for tonight’s meeting city staff acknowledges that the ultimate choice for Council will require balancing the interests of homeowners and developers with the goal of preserving trees.

Costs to have a contractor remove a large tree can easily be several thousand dollars. In addition to the paperwork required for a permit, the proposed ordinance would add requirements to either plant new trees or pay a replacement fee based on the size of the removed tree that would be at least $5,000.

“It is important to note,” the memo says, “that both approving and denying tree removal requests may result in a significant impact to quality of life.”

The ordinance as drafted would not address the imbalance in tree canopy between different areas of the city.

The Planning and Development Committee meeting is scheduled for 5:15 p.m.