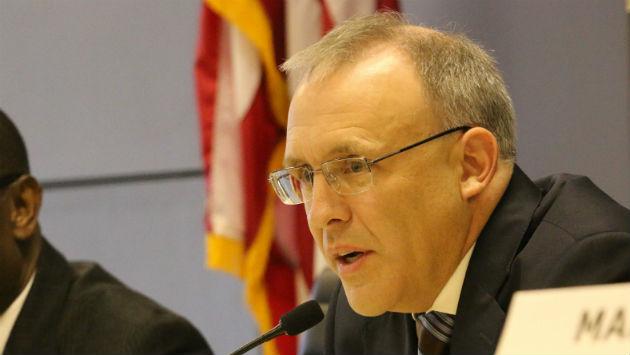 Evanston Mayor Steve Hagerty has called a special City Council meeting for 10 a.m. Friday to consider a measure that would block a July 1 increase in the minimum wage approved by the county board.

City Manager Wally Bobkiewicz told members of the Economic Development Committee Wednesday night that the proposed ordinance to be considered by the aldermen would include a sunset clause so it would only temporarily block the increase until the City Council could have a more extensive debate on the minimum wage issue at its next regular meeting on Monday, July 10.

The ordinance would also block a related county measure that would require employers to provide paid sick leave benefits to workers.

The county adopted the minimum wage measure, whose lead sponsor was Commissioner Larry Suffredin of Evanston, last October. It would gradually increase the minimum wage from the current statewide minimum of $8.25 an hour to $13, in line with similar increases adopted by the City of Chicago. The first step of the increase, to $10, is to take effect July 1.

Bobkiewicz said it initially appeared that only communities on the western edge of the county were opting out of the wage hike measure — as home rule communities are allowed to do under state law.

But within the past few days, he said, the override fever has spread and now both Skokie and Wilmette have moved to override the wage increase, which would apply to any business with four or more employees.

In Oak Park, a community often compared politically to Evanston, trustees are scheduled to vote on an override measure during a special meeting at 5 p.m. Friday.

Alderman Melissa Wynne, 3rd Ward, who was chairing the EDC meeting, said a vote on a temporary override measure Friday would at least give aldermen time to think about the issue before taking more permanent action.

By July 10, Bobkiewicz added, people who might be going away for the Fourth of July holiday weekend would be back and “then we could get a fair hearing for folks on all sides of the issue.”

Alderman Don Wilson, 4th Ward, said having Evanston’s minimum wage increase while it did not go up in neighboring communities “would create significant economic disadvantages” for business owners here.

“The idea of having the county do it was to make it uniform,” Wilson added.

A union-backed nationwide campaign to raise the minimum wage to $15 an hour has gotten far less traction in Evanston than in Chicago, and city officials have previously avoided taking any action on the issue for fear of driving business to neighboring communities with a lower wage rate.

A study last fall by the Voorhees Center at the University of Illinois Chicago indicated that a minimum wage increase to $13 an hour would eliminate the housing cost burden for several hundred Evanston families.

While all full-time City of Evanston employees make more than $15 an hour, scores of part-time city workers fall below that level.