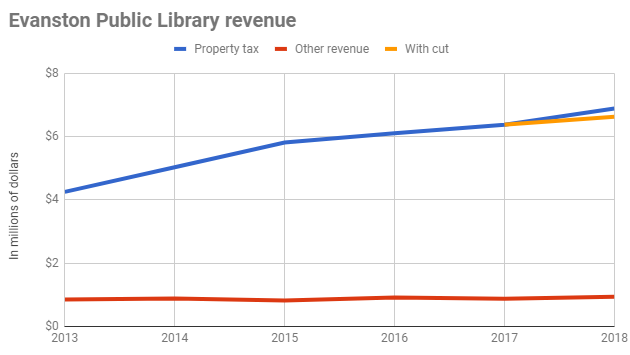 Evanston aldermen are scheduled to vote Monday on trimming the proposed library tax levy as they wrap up action on the city’s 2018 budget.

The proposed change would cut the library’s tax levy to be paid by property owners next year from $6.96 million to $6.76 million.

The library levy for this year’s budget was $6.41 million. So the change would reduce the increase over this year from 8.6 percent to 5.4 percent.

The city’s appointed library board has sharply increased its tax-funded spending over the last several years, from $4.2 million in 2013, to what it originally proposed as $6.9 million next year. That amounts to a nearly 62 percent increase over the six-year period.

Meanwhile, the library’s revenue from user fees, grants and other sources has grown only about 10 percent in the same period.

After aldermen at their last meeting complained that the library’s spending plan was too rich, the library board last week voted to cut a planned $140,000 purchase automotive equipment next year and trim $45,000, or about 13 percent, from its planned spending on internet services as well as making some other, relatively minor, budget adjustments.

Under state law, the City Council can’t specify how the library board spends its money, but it can reduce the total library tax levy whenever it exceeds a voter-referendum approved tax cap, as it has over the past several years.

As for the rest of the city budget, the aldermen are scheduled to adopt a revised plan for reorganizing the social services program currently housed in the Police Department and moving it to the Health Department.

The new plan would create two full-time and two part-time positions in the Health Department and move the youth advocate position to the Parks Department.

City Manager Wally Bobkiewicz says the new plan will save $278,000 over the cost of the equivalent programs this year.

Another last-minute budget change is a 1 percent increase in the athletic tax, which is expected to bring in an additional $80,000 in revenue.