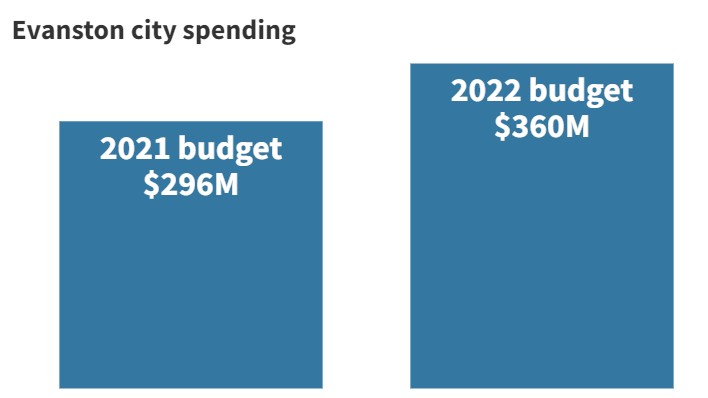 Evanston’s City Council has adopted a $360 million spending plan for 2022 — a nearly 22% increase in spending from this year — but left the total city property tax levy unchanged.

Most of the spending increase will be funded by American Rescue Plan Act money the city is receiving from the federal government to respond to the coronavirus pandemic.

Much of the rest will come from long-term borrowing for capital improvement projects.

Ald. Melissa Wynne (3rd) suggested deferring the pension fund discussion to the Finance and Budget Committee — “it’s not something to be done on the fly,” Wynne said.

Kelly’s motion was rejected on a 6-2 vote, with only Ald. Devon Reid (8th) joining her in voting for it.

Kelly earlier had moved to table action on the budget until next month. But after city staff said that could put the city in jeopardy of running out of time to meet state budget deadlines, the Council rejected that move, with Mayor Daniel Biss breaking a tie vote.

Reid failed to get a second for a proposal he offered to increase the wheel tax on a second car registered to the same address by $20 — a move he said would bring in an additional $460,000 in annual revenue.

He called it a “a progressive measure to encourage people to consolidate vehicles.” Wynne responded that not everyone’s second car is a luxury, but she suggested the Finance and Budget Committee could discuss the concept next year.

The wheel tax hike idea died for the lack of a second.

Reid also failed to gain traction for a proposal to spend $30,000 to restripe traffic lanes on Custer Avenue — something he claimed would reduce traffic speeds there.

The Custer proposal went down to defeat on a 6-2 vote, with only Ald. Bobby Burns (5th) joining Reid in supporting it.

The final vote on the budget was 5-3, with Kelly, Burns and Reid voting against it.