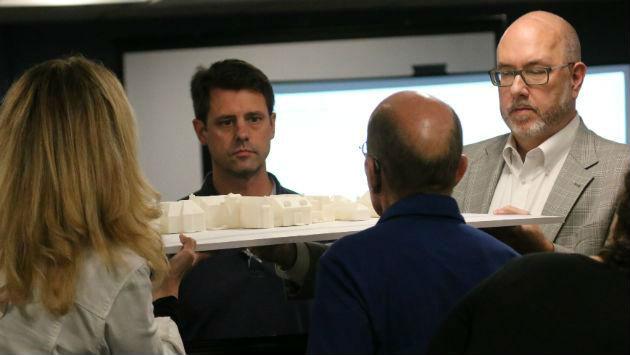 It’s been a year filled with a mixed bag of news in Evanston — and now that it’s almost over, we’re taking a look over the next three days at some of the stories that drew the most interest from Evanston Now’s readers. Let’s start the countdown, from number 15!

Two and a half years after buying a vacant lot on Evanston’s lakefront, and despite continuing objections from neighbors, Adam and Susan Sabow finally have Preservation Commission approval to build a home there.

The commission voted 4-2 Tuesday night to approve what’s at least the third major revision to designs for the contemporary home at 917 Edgemere Court.

As described by architect Fred Wilson of Morgante Wilson Architects the latest design makes the house shorter than before, eliminates the use of wood siding in favor of stucco and glass and removes a c-shaped design feature from the front facade.

Owner Dwayne MacEwen, principal at DMAC Architecture in Evanston, says he plans to turn the building into a new office for his architecture firm and also a co-working space.

MacEwen, who bought the building in 2015, says getting started on the renovation work was delayed while he worked on major projects for other clients.

Police Cmdr. Ryan Glew says an officer on patrol about 1 a.m. saw a car fail to signal for a left turn in the 2400 block of Emerson Street and pulled the car over just across the North Shore Channel in the 9400 block of McCormick Boulevard in Skokie.

In addition to finding that Reid didn’t have a valid license, Glew says officers discovered a small amount of marijuana in the car and issued Reid, 25, a citation for possession of under 10 grams of cannabis.

Police have charged a 63-year-old Evanston man with four different attacks involving a knife including one in which a dog was stabbed.

Evanston Police Cmdr. Ryan Glew says James Collins was taken into custody Friday afternoon about 4:15 p.m. after he tried to rob a 51-year-old Chicago woman who was walking in the 800 block of Church Street.

Glew says Collins approached the woman with a knife, demanded her purse and grabbed at a large duffle bag she was carrying that held a cat. He allegedly threatened to stab both the woman and the cat.

The Greek street-food restaurant Yeero Revolution at 1009 Davis St. in Evanston has closed.

But the restaurant reopened as Chicago Hot Dog & Co. in August.

Also on the food front this year, questions over whether a proposed restaurant looked too suburban for Evanston, the arrival of self-serve beer taps in town and Prairie Moon closing and reopening at a new location.