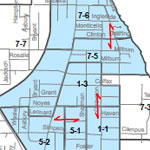 The Cook County Board voted Tuesday to dramatically reduce the number of voting precincts for next year's election, a move County Clerk David Orr says will save about $1 million.

Countywide the cut means 14 percent fewer precincts. In Evanston, which will lose 11 of its 64 precincts, the reduction totals 17 percent.

Orr says early voting and absentee voting by mail have reduced the need for local polling places on election day.

The clerk says that in 2008 a quarter of all voters cast their ballots before election day. And 2012 will be the first presidential election in which all voters will be eligible to request an absentee ballot.

Orr said his election budget request for next year is $24.6 million, down about $3 million from the last presidential election in 2008.

Orr says many of the affected precincts will be combined with another one at the same polling location.

A map showing all the Evanston changes is available online.