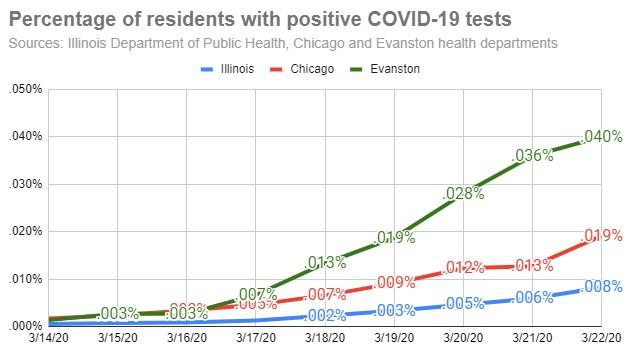 Evanston’s rate of confirmed COVID-19 cases remains substantially higher than the rate in the City of Chicago or the State of Illinois as a whole, but latest numbers suggest the gap may be diminishing.

As of Sunday, 30 people, or about one in every 2,500 Evanston residents, had a confirmed case of the novel coronavirus. That rate, of 0.04%, was more than twice the rate in the City of Chicago and nearly five times the rate across all of Illinois. But the spread in rates had been somewhat greater late last week.

The few other Cook County communities for which data is available also show lower rates than Evanston. As of Sunday, Skokie had 17 patients, for a rate of 0.027% and Oak Park, with two reported patients, had a rate of 0.004%, a tenth that of Evanston’s.

It’s impossible to know whether the differing rates are a result of more extensive testing in some communities than others, because neither the state nor local health departments have provided figures for the number of tests administered in each community.

Given generally limited access to testing for the virus state-wide, and with Northshore University HealthSystem’s Evanston Hospital one of the few locations in the state with its own in-house testing capability, it could be that Evanston’s high share of confirmed cases simply is a consequence of there being more access to testing here than elsewhere in Illinois.

Updated case count numbers for today are scheduled to be released around 3 o’clock this afternoon.