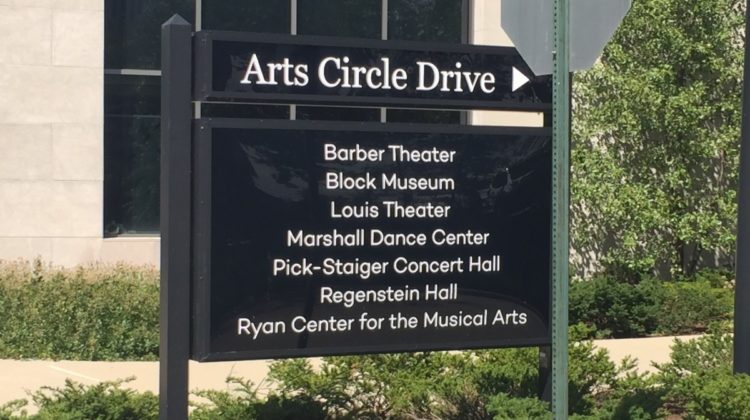 COVID-19 is bringing down the curtain on the arts. And it may take months or years for cultural institutions, both in Evanston and nationwide, to recover.

“The industry is hurting, it’s hemorrhaging,” says Jerry Tietz, concert manager at Northwestern University’s Bienen School of Music. Northwestern is by far the largest arts organization in Evanston, with hundreds of annual concerts, plays, and other performances. But it’s far from the only one. There are nearly 50 arts and cultural institutions listed by the city, and all are suffering from the impact of the coronavirus pandemic.

At the Piven Theater, which has both performances along with acting classes and summer camps, Artistic Director Jen Green says, “Our budget needs to shrink significantly.”

Selling tickets to its own plays, plus renting out space to other theater organizations used to bring Piven $20,000 a year. Now, Green says, that’s “zero.” State-required limits on indoor crowd size, plus public reluctance to attend in-person events anyway, led to the cancellation of all shows this season and for the foreseeable future. “Budgeting is anybody’s guess right now,” Green says.

But even if enough people wanted to attend concerts or plays during a pandemic, there’s still another big issue … the performers. David Ellis, music director of the Evanston Symphony, points out that social distancing a full orchestra on stage is close to impossible. Plus, woodwind and brass instruments are perfect generators of aerosolized droplets of saliva, ideal spreaders of COVID. “A lot of musicians are nervous,” he says, about playing under such conditions.

The Evanston Symphony had to cancel concerts in March and May. An October event has been postponed until a date heard so often these days, TBA. It’s a particular blow with the orchestra’s 75th anniversary coming up.

The symphony, as well as several other non-university ensembles, give their concerts at Northwestern. NU’s Tietz says, “It was every day I had to call an executive director and say, you know, that can’t happen. And they’d say, ‘I know.'”

But Tietz is particularly saddened by the impact on students. In spring quarter 160 to 180 student recitals had to be cancelled due to COVID, he says. “I reserve the most regrets for the seniors,” he says, whose recitals were to be the capstone projects for their final year in school.

Many arts groups are doing whatever they can online. At Piven, summer camp for young actors was virtual. However, Green says, Piven only had about 30 percent of the usual number of campers. It’s hard to plan for the future, she says, not knowing how long the pandemic will last. So now, that planning includes both virtual after school and weekend programs and in-person classes with fewer participants and social distancing.

Evanston’s arts and cultural organizations are just a small section of a very grim reality nationwide. A study by the Brookings Institution projected a loss of almost 1.4 million jobs in the industry, with a loss of $42.5 billion in sales — and that was only through the end of July. There is no end in sight.

Brookings says a national financial rescue package is desperately needed and that “any lasting damage to the creative sector will drastically undercut our culture, well-being, and quality of life.”

Musicians and actors are chance-takers by nature, so they rarely throw up their hands and surrender. Tietz says many Northwestern students and faculty have “creatively risen to the challenge of how to do things which are still meaningful” digitally or on social media.

But, he says, “that’s not the way this industry is able to get by. For a lot of arts lovers, there is no substitute for being in the room.”

And the room needs to be sold out for an arts organization to stay in business. Patrons spread out six feet apart won’t cut it, because the theater is closer to empty than full. “The whole economic model of any symphony, “says Ellis, of Evanston’s orchestra, “is to try to fill the hall.”

And Green puts it this way. “@e’re trying to make smart decisions for the longevity of the arts. It’s a do or die time.”

There’s a classic saying in theater that “the show must go on.” The question now is how, and when?