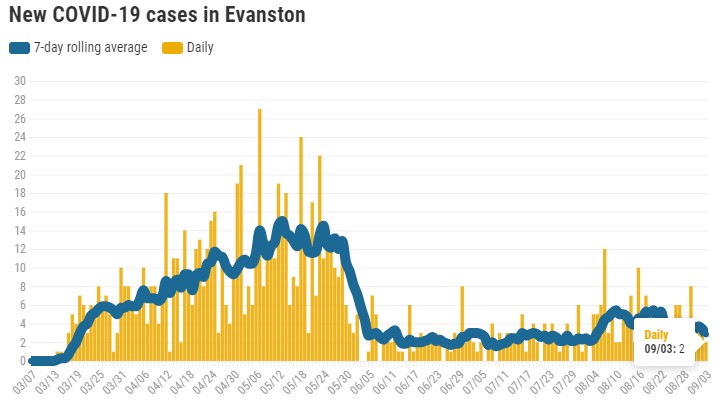 And the Illinois Department of Public Health reported seven more cases in Evanston for a total of 1,006. The state also reported results of 255 COVID-19 tests here, which would make the day’s positive rate in Evanston 2.75%.

The state and city figures frequently differ, though they usually aren’t this far apart.

No new deaths were reported in Evanston today, leaving the city’s pandemic death toll at 72.

The number of tests reported by the state has been lower than usual for several days, and today IDPH officials acknowledged that a slowdown in data processing within the agency’s systems has affected the reporting this week.

The agency says the delay is due to the large volume of tests conducted and that they anticipate more timely reports soon.

They also say the delay in reporting aggregate numbers has not affected the reporting of results to individuals who’ve had the tests.

The state reported results of 40,795 more tests with a positive rate of 3.3%. The seven-day average positive rate for the state now is 4.5%