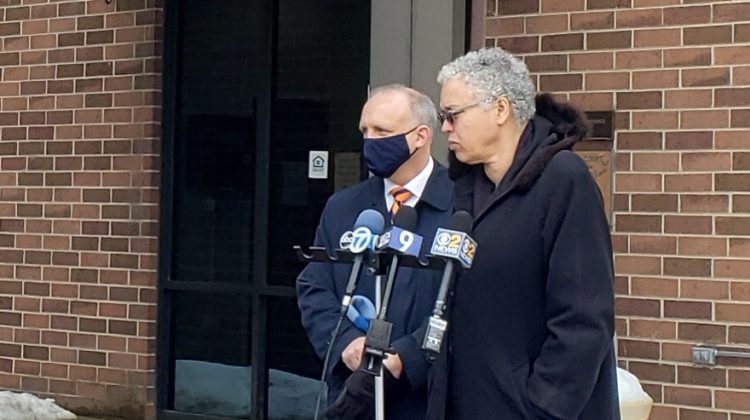 For 65-year old Joy Horton, the chance to get a COVID-19 vaccination “just dropped out of the sky” for her and for other residents of the Victor Walchirk Apartments in Evanston today.

The building, on Noyes Court, is a senior citizens’ affordable housing residence, operated by the Housing Authority of Cook County. This morning, those who live at Walchirk, along with staff members who care for the tenants, were given the first of the two-shot coronavirus vaccine protocol, with the second shot to come later. The vaccinations were provided via the Pharmacy Participation Program, in cooperation with Cook County, Walgreens and the Centers for Disease Control.

Bringing the shots to where seniors live was “very nice,” Horton said, so she and her neighbors would not have to travel somewhere else to get them.

Cook County Board President Toni Preckwinkle and Evanston Mayor Steve Hagerty were at Walchirk as the vaccinations began. Preckwinkle told Evanston Now that there is “clearly an equity issue nationwide” for vaccine distribution, and “bringing the vaccinations to people’s doorsteps” is one wat to deal with that.

Just over half of the seniors living in HACC buildings are either Black or Hispanic. This vaccination program is countywide, with the goal of 1100 people getting shots. Two hundred of those are in Evanston.

With the nationwide death toll now at 500,000, more and more people can say they know someone who died from the virus. Horton, for example, said she was friends since childhood with legendary Evanston restaurant owner and community activist Hecky Powell, who passed away from COVID last year.

There will be more vaccination events at HACC buildings over the next six weeks. Horton said anyone with the chance to get a shot should take advantage of the opportunity. And as for whether the vaccination hurts? No way. Horton said, “it was over before you could say boo.”