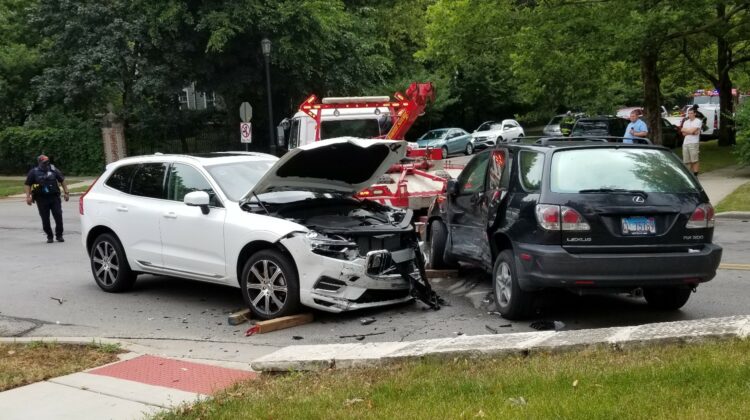 A two-car collision at Ridge Avenue and Greenwood Street shortly after 1 p.m. this afternoon left traffic on Ridge blocked in both directions and sent three people to local hospitals.

Update 3:35 p.m.: Evanston Police Cmdr. Ryan Glew says officers believe a car driven by a 64-year-old Lake Forest woman failed to stop at the stop sign on Greenwood and drove straight into the intersection, violating signs that call for right-turns-only there.

Her vehicle collided with a car traveling on Ridge that was driven by a 41-year-old Evanston man who had a 32 year old male passenger in his car.

Glew says the woman was taken by Fire Department ambulance to Evanston Hospital while the two men were transported to St. Francis Hospital. He says all the victims’ injuries appeared to be non-life threatening and that traffic citations have been issued to the Lake Forest driver.

Ridge Avenue was reopened to traffic around 2 p.m.

Greenwood is one of several intersections along Ridge that been the scene of numerous accidents in recent years, and city officials have tried to limit the problem by installing signs restricting through traffic and turns at the intersection.