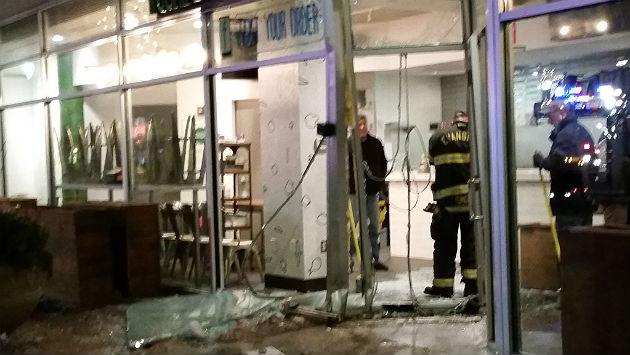 A car being chased by police went crashing through the glass front wall of the Freshii restaurant at 1596 Sherman Ave. in Evanston this evening. 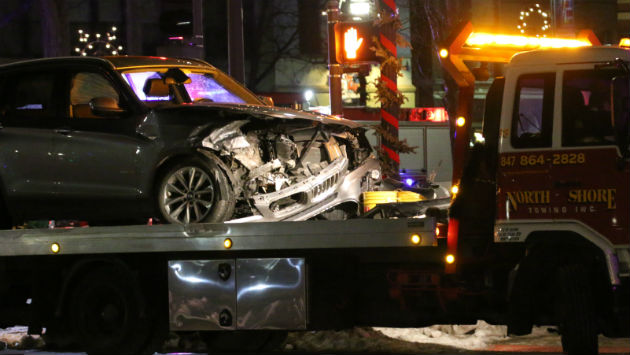 A car being towed away from the crash scene.

Update 10 p.m.: Evanston police say the incident began when an officer attempted to pull over a car for a minor traffic violation near the intersection of Ridge Avenue and Church Street about 6:30 p.m.

The driver of the car sped away, eventually collided with another car at the intersection of Davis Street and Sherman Avenue, and came to rest inside the front window of the restaurant.

Police say three Chicago residents were in the car that tried to elude police — the driver, an 18-year-old male, and the front-seat passenger, a 22-year-old male, were both transported by Fire Department paramedics to Evanston Hospital with minor injuries.

The back-seat passenger, a 25-year-old female, was uninjured — as was the driver of the second car — a 51-year-old Evanston woman.

Police say there was no structural damage to the building, except for the broken glass.

Police say officers recovered a handgun and a small amount of suspected marijuana from the car that hit the building.

The investigation is continuing, and police say dash camera video from the chase is being reviewed to determine if the officer's actions were within departmental policy.