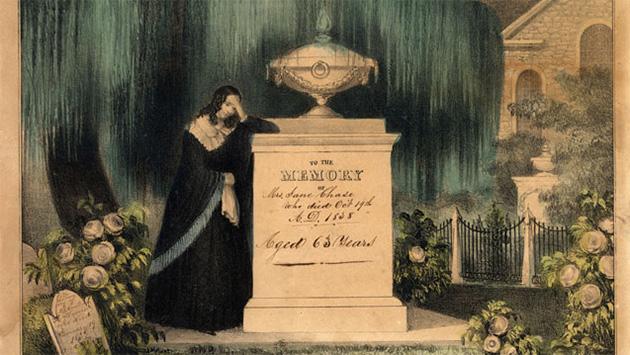 Just in time for Halloween, the “Death Collection” — an archive of death-related oddities — has arrived at Northwestern University Library.

A treasure trove of death-related artifacts, the collection includes funeral wreaths made from human hair cut from the heads of the dead, a salesman’s kit of tombstone designs from the 1930s and a painting of a post-mortem child dating back hundreds of years.

But don’t let its creepy nature fool you. The 76-box collection of death-related materials is important for its research as well as eek-factor value.

“There’s so much cultural evidence in the collection’s objects and ephemera,” says Scott Krafft, curator of Northwestern’s Charles Deering McCormick Library of Special Collections. “Death is a fact, and people want to understand how, over the centuries, cultures and generations dealt with it.”

Collector McDowell died in 1999 in the midst of a highly prolific career that included TV and film collaborations with blockbuster author Stephen King and film director Steven Spielberg, work on “Nightmare before Christmas” and “Tales from the Darkside” and some 30 books.

Stephen King hailed the Harvard-educated McDowell — who wrote his doctoral thesis on 19th century American attitudes toward death — as “a writer of the ages.” Years after McDowell’s death in 1999, King’s wife Tabitha King, a horror writer in her own right, completed McDowell’s unfinished last novel.

The Northwestern collection includes plenty of 19th century stereograph cards, daguerreotypes and tintypes depicting post-mortem adults and children. And it boasts five boxes of material on psychics and Spiritualism, a school of thought revolving around the belief that the living can communicate with the dead and that reached its height in the late 19th and early 20th centuries.

“’Spirit photographs,’ in which manipulated images depict the living talking to ghost-like creatures, may look hokey to us, but many in their day accepted them as authentic,” says special collections curator Krafft.

A box of loose photos depicts images of funerals and dissections while, in black and white and in color, there are highly graphic images of auto and train wrecks and of murder and suicide scenes taken in the 1970s.

In the future, Northwestern University Library plans will develop an exhibit of items from the collection, which was purchased from McDowell’s partner and Northwestern alumnus Laurence Senelick.

Until then you can visit the Evanston campus library and make a request to see artifacts from the collection. Viewer beware!