Quite a coincidence tonight — just as city workers were showing off their freshly painted plows at the Civic Center, the season's first major snow storm was bearing down on Evanston.

The Chute School paint job, and others,Â may be mangled by morning.

Hardly anybody showed up for the city's scheduled snow briefing — either folks figured they already know the drill, or they didn't want to deal with the blustery weather.

Students from Bessie Rhodes Magnet School were on hand though –their plow paint job, featuring their own take on Van Gogh's Starry Night,Â won first prize in the city's competition.

The winningÂ 'Starry Night' plow, ready to head out into the oncoming storm.

With the National Weather Service forecasting as much as a foot of snow by midday Friday — and predicting the worst conditions for the morning rush hour — it figures to be aÂ long night for the snow removal crews. 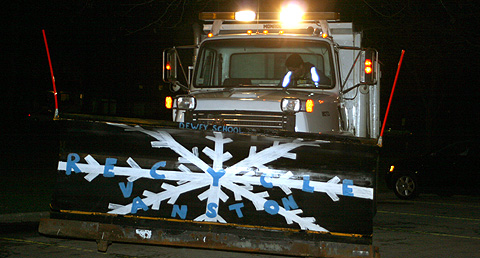