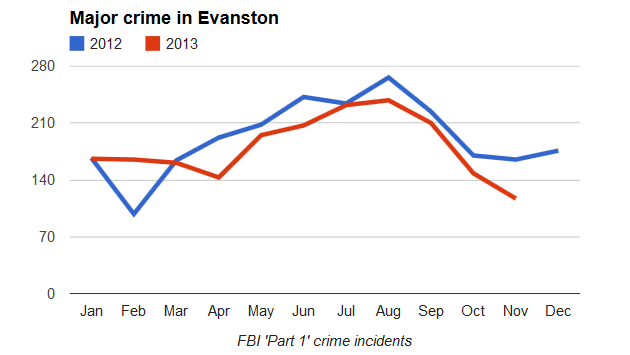 While crime overall declined in Evanston this year, the city continued to face concerns about gun violence and how best to improve community safety.

Data through November from Evanston police show that the major crimes local departments report annually to the FBI declined by nearly 7 percent, compared to the same period last year.

The most frequently occurring crime categories all fell — with robberies, burglaries and aggravated batteries and assaults each down about 14 percent, motor vehicle thefts down 12 percent and other thefts down 5 percent. 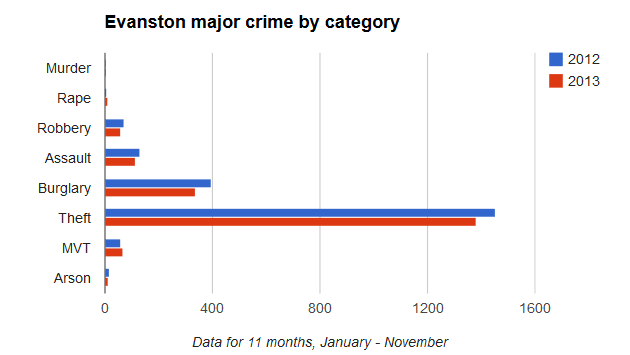 As Police Chief Richard Eddington pointed out at a recent community meeting, that's within the range of homicides that Evanston has had for the last decade or more — a range of 2 to 5 per year.

With 4 homicides in a population of 75,000, the average Evanston resident's chance of becoming a homicide victim this year was one in 18,750.

That was higher than the risk for residents of New York City, where the murder rate fell to one in 25,000 this year. New York had recorded just 332 homicides as of Dec. 26 — the lowest number there in at least the past half century.

But it was about a third of the risk level for Chicago residents, where, despite an 18 percent drop from 2012, residents faced a one in 6,500 chance of becoming a murder victim this year.

Police believe they know who committed all four Evanston homicides this year.

In response to crime concerns, the city this year continued gun buyback programs started in 2012, expanded stop-and-frisk programs and equipped an old armored car with cameras to create a highly-visible mobile surveillance vehicle.

Aldermen considered active collaboration with the high school to create a so-called safe school zone around ETHS, but backed off after some residents complained that it would violate civil liberties.

On tap for early next year, a proposal from Mayor Elizabeth Tisdahl to seek grant funding to add a string of surveillance cameras along main walk routes to the high school on Dodge Avenue and on Church Street.