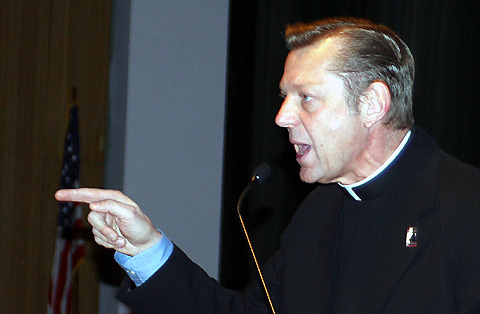 But residents were in a mood to organize to try to drive the rate even lower.

The keynote speaker, the Rev. Michael Pfleger, pastor of St. Sabina's Church on Chicago's South Side, urged residents to take control of their community.

"Drug dealers are reaching out to our children every day," he said, "we need to reach out to them as well."

Father Pfleger said he's organized many community groups to fight crime. He said in one instance 30 residents of a block showed up for a meeting — but only five people — the youngest one 72 years old — agreed to sit in their yards to watch the dealers.

"'The rest of you all go home, you're useless,'" he recalled saying to the group, andÂ added that within three days of starting the neighborhood watch, the senior citizens had cleaned up the drug activity on the block.

"We've gotta get over the divisions that go on," he said, "and form partnership with governmentÂ  and law enforcement, with parents and children, with businesses and the parks."

"Churches have to open their doors," Father Pfleger said. He said some ministers tellÂ him their congregations can't be more active in the community around the church because their members don't live there. "Then go move your church to where the members are," he said.

"If every church offered just one program for youths after school, kids wouldn't know which one to go to, there'd be so many."

"After you pray, we've got to get up off our kness and do something." 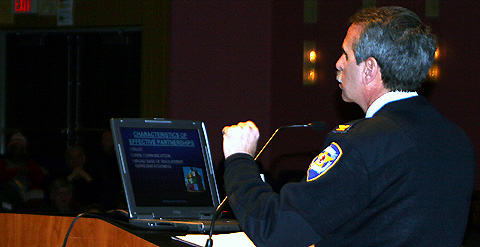 Interim Police Chief Dennis Nilsson said preliminary figures for 2006 show that number of major crimes tracked in FBI statistics fell 8 percent in Evanston. That continues a downward trend that began after crime in the city peaked in 1997.

Two index crimes rose last year — robberies wereÂ up 11 percent to 120 incidents and burglaries increased 37 percent to 778 incidents. But thefts declined 20 percent to 1816 incidents — more than outweighing the increases in the other two categories.

Chief Nilsson noted that many other crimes, including simple battery and simple assault, deceptive practices, criminal damage to property and drug, liquor, vice and weapons violations aren't included in the index crimes tally.

He said Evanston's total count of reported and verified crimes last year was about 8,800. He said that number has also varied over time but has generally declined dramatically in recent years.

But the chief added that "any crime is too much" and quoted the humorist Will Rodgers as saying, "even if you're on the right track, if you stand still, you'll still get run over."

He said Evanston police have had a community partnership program since the 1980s but want to "jump start it again" to drive crime rates even lower.

After the speeches in the auditorium the session moved across the hall to a cafeteria where residents gathered in small groups around tables to discuss ideas for combatting crime in the city. 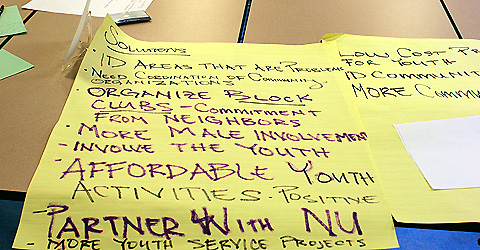 One of many idea lists

They generated dozens of lists of ideas for programs that could fight crime, or help young people avoid turning to a life of crime and then gathered again to review those lists. 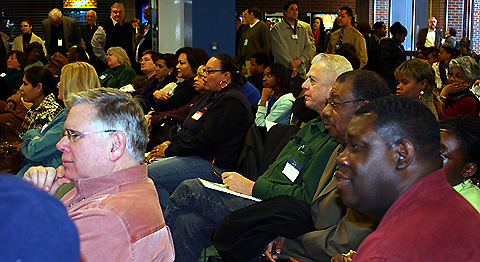 Residents listen to reports from moderators of what ideas the different table groups came up with.