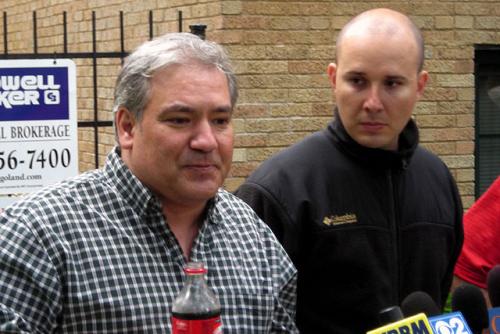 That would have covered about a quarter of the value of Walker’s car, which was stolen in a carjacking last week while Walker was on a run to south Evanston. Gutierrez witnessed the attack and felt compelled to do something.

So Gutierrez set up Clyde Ave. Neighbors Care!, a Web site with information about the attack, criminal proceedings and a PayPal account. Gutierrez’s friends and neighbors came through with some initial contributions.

“Nobody here is rich, but we’re all very close,” Gutierrez told Evanston Now.

Then the site went viral.

The result: More than $16,000 in cash donations for Walker, who is in now in the market for a new Ford Focus.

“I want Chicago to know that this guy saved my ass!” Walker exclaimed on Tuesday evening to a crowd of reporters and community members before Gutierrez presented him with the proceeds.

Walker, who wore Ace bandages on his right arm, also thanked the Evanston Police Department, and asked the officers who helped him to come up to the podium.

Evanston Police Chief Richard Eddington told Evanston Now he has never seen anything similar, and praised the community for its efforts.