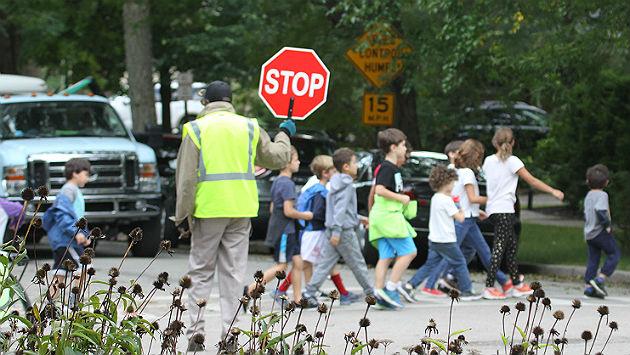 For the most part, the same crossing guards greeted Evanston District 65 students after winter break but they’re now employed by Andy Frain Services rather than the City of Evanston according to a report at last night’s City-School Liaison Committee meeting.

As part of the city’s 2019 budget process, crossing guard services were outsourced with the change taking effect when school resumed after winter break.

The crossing guards who had been employees of the city were offered positions with Andy Frain and are mostly working the same intersection.

The transition was very smooth, said Jill Velan, parking division manager, with all spaces filled. She only got one call asking what happened to a specific crossing guard who, it turns out, was no longer working the corner because she’d been promoted to supervisor.

The company will provide substitutes as needed.

Crossing guard services were outsourced to Frain at an annual cost not to exceed $621,000.

That’s more than the $471,000 the city budgeted for crossing guards last year.

But previously the city had to fill in for crossing guards who called in sick with city parking enforcement officers. Under the Frain contract the company is responsible for supplying substitutes and the city anticipates freeing up the PEOs from crossing guard duty will let them generate another $200,000 in parking ticket revenue for the city.

Andy Frain Services provides a variety of security services, including crossing guards for many Chicago-area communities. Evanston crossing guards will have the opportunity for additional work, such as ushering or ticket-taking at sporting events or festivals, if they want it.

“I was the biggest skeptic of all,” said City Manager Wally Bobkiewicz, “but so far so good.”