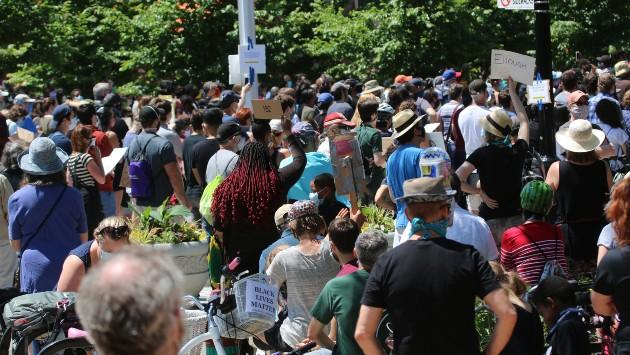 A crowd police estimated at 800 people filled Fountain Square and the surrounding streets this afternoon for a Black Lives Matter rally organized by several community groups.

The Rev. Michael Nabors of Second Baptist Church said racisim has to be killed and buried so it will never rise again.

Nabors, who is also president of the local NAACP chapter, added that Evanston faces great challenges — including that “so many people of color are being forced to move out because they can’t afford property taxes and and can’t afford the homes.”

“We’re going to put a stop to that,” Nabors added.

“We must not only change people’s minds and hearts, we must change systems, structures and the dominant ideology,” Logan added.

Logan also praised the diversity of the crowd that turned out for the rally, saying, “We are all here together, we thank you and appreciate you.”

For a while during the rally a helicopter from Channel 7 News hovering overhead made it difficult for many in the crowd to hear the speakers.

But the chopper eventually flew off, after police relayed the noise complaints to the station using Twitter.

The rally, which began at 2 p.m., ended about 4:35 p.m., and there were no reports of any disturbances associated with the event.