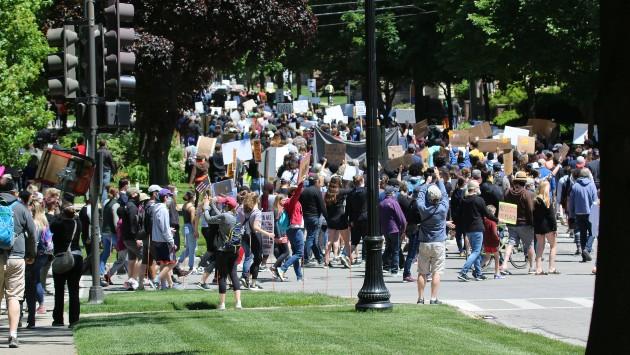 A crowd of people protesting police violence stretched for blocks as they marched through Evanston this afternoon.

Starting from Ridge Avenue at Church Street, the group marched south on Ridge to Lake Street and turned east …

Police diverted auto traffic around the march route as the protestors continued west on Dempster to Dodge Avenue and then north to their rally site in a parking lot across from Evanston Township High School.

The marchers protested the death of George Floyd last Monday in Minneapolis after a police officer, Derek Chauvin, held a knee to his neck for several minutes while Floyd said he couldn’t breath and then became unresponsive.

Chauvin since has been charged with third degree murder, but signs carried in today’s demonstration called for the arrest of the other tree police officers involved in Floyd’s arrest.

Sunny skies and temperatures around 60 degrees undoubtedly increased the size of the turnout, although some would-be participants had voiced fears online earlier in the day that — with the city just starting to ease COVID-19 restrictions on social distancing — it might put their health at risk to join the protest.