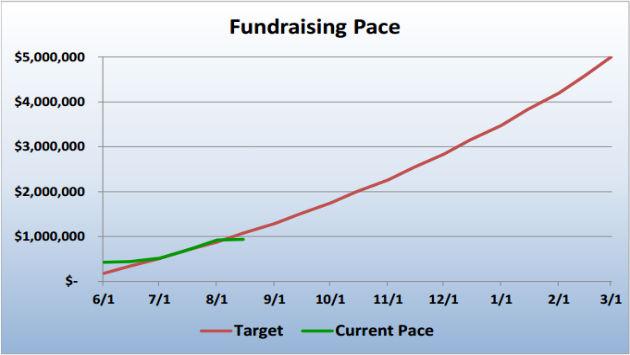 Evanston aldermen were told Monday night that nearly $1 million has been pledged so far in private contributions for a new Robert Crown Recreation Center.

Assistant City Manager Marty Lyons says that total doesn't include a dollar-for-dollar matching gift pledge by another donor that brings the total raised or pledged to $1.87 million.

Lyons said that based on benchmarks set for the campaign by the city's fundraising consultant, the effort was at or ahead of target until very recently, when the pace has slowed a bit, as shown in the chart above. He said the fundraising team hopes by mid-September to hit the $1.5 million mark in contributions from a total of 60 people, not counting the matching gift.

The campaign has a goal of ultimately raising $5 million in community gifts toward the center. The city has agreed to provide $10 million in bond funding for the project and the Library Board has promised $2.5 million to include a new library branch there.

The City Council Monday voted to authorize city staff to issue a request for qualifications, seeking an architectural and engineering team to design the new facility.

The RFQ envisions a multi-stage process that would see the winning firm initially hired late this fall only to do a schematic design for the building, with other steps in the process subject to the success of the fundraising campaign by early next year.