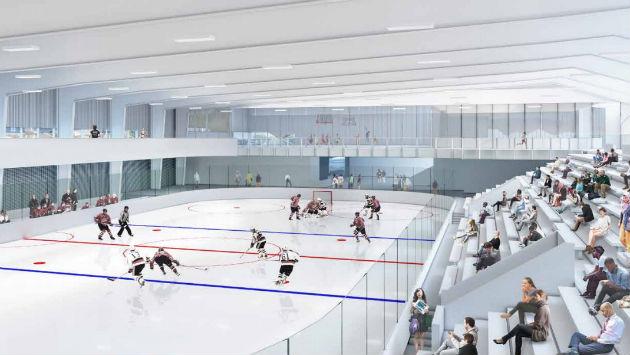 Friends of the Robert Crown Center announced today that it has met its initial fundraising goal of $10 million and has set a Phase II goal of adding $5 million more in private donations, bringing the new goal to $15 million.

“The initial study said that we could raise $3 to 5 million for a project like this, but with strong community support and the generosity of our very large anonymous matching donor, we have raised more than double that goal – over $10 million,” said Daniel Stein, president of the friends group, the 501(c)3 organization partnering with the City of Evanston and Evanston Public Library to build the facility.

Stein said while donors appreciate the creation of two brand new full sheets of ice and Evanston’s first-ever publicly available turf fields, expanding educational and creative opportunities is what’s fueling much of the support at this point in the campaign.

“The chance to educate minds and open up opportunities for everyone to meet their full potential, along with strengthening the health and confidence of every child who plays or creates there and doing it all in a place that brings the whole Evanston community together in one, accessible, welcoming place is what is driving most of  the donations,” added Stein.

The $40 million project includes a 5,000 square foot library where Northwestern students and other programs can tutor and mentor neighborhood kids while expanding Internet access to families who don’t have it at home.

“We have a world-class university on one side of town, and kids with no Internet at home on the other. Our new Robert Crown will not only provide a space to get homework and online assignments done, but also create the opportunity for tutoring and mentoring so that all of our children, no matter where they live in Evanston, have an opportunity at reaching their full potential,” library Director Karen Danczak Lyons said.

The new facility will also upgrade and expand the Crown child care center, which serves over 100 Evanston families and will allow more children to get quality, affordable child care close to home.

The campaign has successfully solicited more than 400 gifts from 325 families, businesses, foundations and organizations, including selling more than 140 personalized bricks at $500 each.