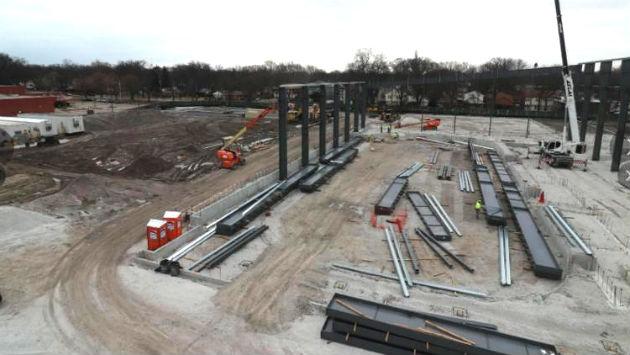 Friends of the Robert Crown Center announced today that the campaign has raised more than $12 million, and in December added its 1,000th donor.

The group also announced that it now has $4.5 million of the total raised in cash on hand.

“We knew after meeting our original goal of $10 million that $15 million would be a stretch, but Evanston donors large and small have really stepped up,” said Daniel Stein, president of FRCC, the 501(c)3 organization partnering with the City of Evanston and Evanston Public Library to build the facility.

In the ongoing campaign, contributions in the last quarter ranged from $10 one-time donations to as much as $50,000 spread out over multiple years. As of Monday, the campaign had raised $12,050,612 in donations and commitments.

Kelly McCabe, who along with husband William Althouse, became FRCC’s 1,000th donors when they bought a personalized brick for $500 on Dec. 18.

“We actually live right across the street from the Robert Crown Center, and have two small children, so our family is super excited about this project. I bought this brick as a Christmas gift for our family,” McCabe said. FRCC has sold more than 260 personalized bricks, each with three lines of text, that will be incorporated into the center’s design.

Many donors are making multi-year commitments that generally range from three to five years.

“Thanks to the contributions of more than 1,000 donors, the City is currently building a $53 million asset but will need to finance just $38 million of that guaranteed maximum price,” Stein said.

The Crown Center project includes a new Evanston Public Library branch where neighborhood children can receive tutoring and mentoring while expanding Internet access to families who don’t have it at home.

In addition, the project will upgrade the child care center, which provides pre-school and child care for more than 100 Evanston families, and provide athletic facilities for Beacon Academy, the Montessori high school in Downtown Evanston.

That’s in addition to two NHL size ice rinks, a gym double the size of the current one to provide both structured and drop-in activities, a running track and Evanston’s first publicly available turf fields.