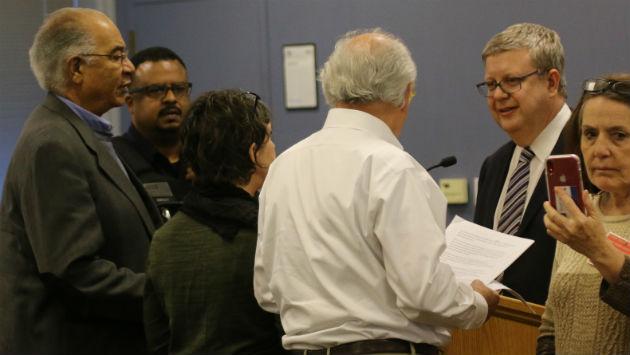 A couple dozen dead-end opponents of the half-completed new Robert Crown Community Center revolted this evening when asked to sit through a series of city-produced videos about the project.

Instead they milled about the City Council chamber as the videos played, shouting demands to City Manager Wally Bobkiewicz and chanting “How are you going to pay for this” and “Hey, hey, ho, ho, city manager has got to go.”

Crown critic Mike Vasilko tries to speak over the audio of the city’s videos describing the project.

Bobkiewicz seriously misjudged the likely demeanor of the group that showed up for the informational meeting when he built what he said was 90 minutes of videos into the session — including interviews with city officials involved in the project and a recently completed video tour of the construction site.

An angry Clare Kelly shouts her objections to being asked to watch the videos.

Finally, about an hour into the meeting, Alderman Peter Braithwaite, 2nd Ward, tried, with limited success, to try to bring some order back to the session, reading written questions — or statements — submitted by audience members only to have Bobkiewicz’s efforts to respond interrupted by shouted catcalls from the audience.

Given that aldermen have approved the issuance of bonds to fund the project, the question of how the project will be paid for has already been answered.

And the construction project remains on schedule for an opening of the new building this December, despite the ongoing efforts of the opponents to try to derail it.

Over 1,000 Evanstonians have pledged more than $12 million in voluntary contributions toward the project, and we will all see the tab for the remainder of the $53 million project on our tax bills for the next 25 years, as provided for in the bond sale agreements approved by aldermen.

Despite years of well-documented public meetings about the project, the opponents continue to claim that there was no transparency in the City Council’s Crown Center decision-making process.