Evanston's transportation director says the Chicago Transit Authority is moving ahead with plans to replace three century-old viaducts in the city.

Paul Schneider told the city's Parking and Transportation Committee Wednesday night that the viaducts to be replaced are at Greenleaf, Dempster and Grove streets.

Schneider said there's still some questions about the project, because the funding source is the subject of a lawsuit now pending before the state supreme court, but the CTA is moving ahead and expects funding to be available.

He said the agency plans to advertise the project in April, and the chosen contractor is likely to get the go-ahead to begin work by late summer.

The contractor then is expected to spend up to six months fabricating the materials for the viaducts off site, with on-site construction work likely to start on some of the viaducts early next year.

Five and six years ago the CTA replaced viaducts at Church Street and Main Street, the most recent viaduct replacement projects in Evanston. 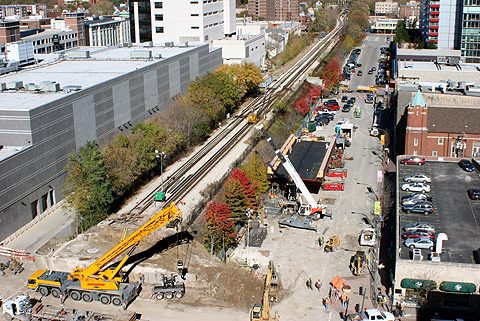 A view of Church Street at Benson Avenue the weekend in 2006 that the new viaduct there was installed. See more pictures from that project here … here … and here.

Schneider recalled that "there were significant logistics concerns with staging."

The Main Street viaduct construction site ended up projecting out onto Chicago Avenue and "required some traffic runaround and detouring."

Schneider said, "We're facing the same kinds of problems, but hope we can come up with ideas to have less impact this time than last."

He said that at Greenleaf Street the CTA is working with Jewel officials in hopes of using part of the supermarket parking lot as a construction site for assembling the viaduct.

It not, he said, Greenleaf Street would have to be closed so the viaduct could be built in the street.

At Dempster Street, Schneider says the CTA hopes to be able to construct the viaduct in Sherman Place, assuming an agreement can be reached with a neighboring property owner to provide alternate access to parking lots behind the storefronts there.

The only alternative would be to build the viaduct on Dempster, which would create much more of a traffic disruption.

Schneider said Grove Street is much more challenging than the other two sites, and it appears the only alternative is to build the viaduct in the street.

Schneider said on-site construction work on each of the viaducts is expected to take about six months.

Schneider said all three viaducts may be installed during 2012, although it may take until early 2013 to finish the last of the three.