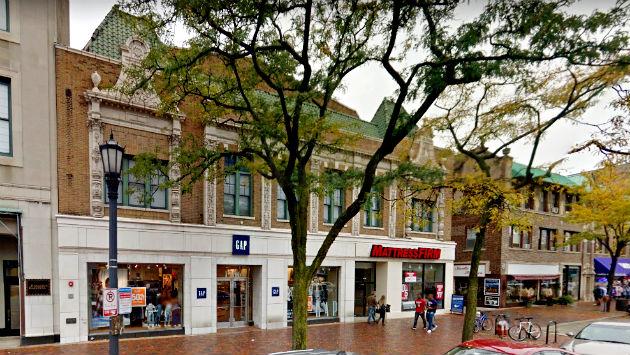 Preliminary plans for a mixed use development that would include a long-hoped-for downtown Evanston performing arts center are to be unveiled at a 1st Ward meeting tonight.

The development team, headed by Farpoint principals Scott Goodman and Patrick O’Connor, envision a mixed use development on the site, with the performing arts center at the base and a hotel or residential tower above.

The development would likely require vacation of the alley that separates the two buildings.

With the alley, the parcels total nearly 45,000 square feet. The city code requires projects of that size to be approved as planned developments. The properties are zoned D2, which permits a building height, with planned development allowances, of 125 feet.

Update 2:30 p.m.: Alderman Judy Fiske, 1st Ward, says the developers have secured an agreement with Northlight Theatre to occupy theater space in the proposed building. Northlight, which got its start in Evanston, is now based in Skokie, but has been rumored for some years to be interested in returning to Evanston.

Fiske says she hasn’t seen any renderings of the proposed development but that she’s heard it is planned to be around 20 stories tall.

Goodman was co-founder of Sterling Bay, a developer known for bringing suburban-based companies to downtown Chicago and landing Google’s midwest headquarters for a Fulton Market site.

He left that firm last year to form Farpoint, which is among the companies chosen by the City of Chicago in June to redevelop the former Michael Reese Hospital site.

Various sites have been proposed for a downtown performing arts center over the years — including the Varsity Theater building itself. The most recent previous development proposal, which hasn’t gotten off the ground, called for a location at the southeast corner of Benson Avenue and Clark Street. A previous plan suggested building on the library parking lot on Chicago Avenue — a property that is now planned to be redeveloped as an office building.

The 1st Ward meeting will be held from 7 to 9 p.m. in the community meeting room at the Evanston Public Library.