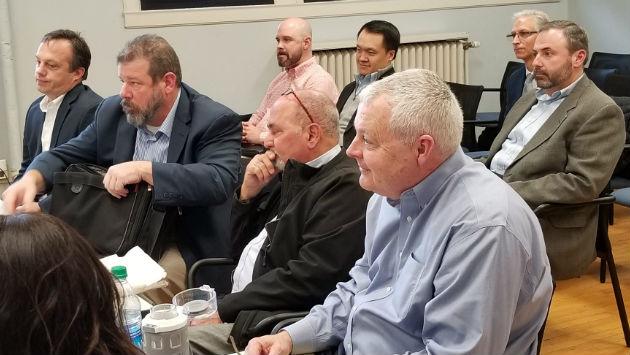 Developers of the proposed 40-unit for-sale townhouse development at 910-938 Custer Ave. say they hope to return to Evanston’s Design and Project Review Committee on Jan. 9 with details of an inclusionary housing plan for the development.

At Wednesday’s DAPR meeting that aspect of the project remained unresolved, as did the potential for the developers to receive some funding for the project from the city’s Chicago Main Tax Increment Financing District.

Several aspects of the new development — ranging from demolition of the existing Dard Products factory and warehouse on the site to landscaping to beautify the Union Pacific embankment across Custer Avenue — potentially could qualify for assistance under the TIF Redevelopment Plan.

But the city’s community development director, Johanna Leonard, said at Wednesday’s meeting that the TIF doesn’t currently have any funds available.

Bill Rotolo of the project development team said the town homes would provide a “huge” tax increment for the TIF, but Leonard said the TIF now has existing debt and that there will be competition for any funds from other projects planned in the area.

She suggested the developers work with city’s economic development manager, Paul Zalmezak, to come up with a plan for TIF funding that would then be reviewed by the city’s Economic Development Committee.

Using city funds for the development would also double the development’s required contribution to the city’s affordable housing fund as a substitute for building affordable units on site from $400,000 to $800,000.

(The City Council this fall adopted amendments to the inclusionary housing ordinance that will increase the affordable housing fees for developments submitted for review after Jan. 1.)

The developers were asked to work with the city’s housing and grants manager, Sarah Flax, to firm up the inclusionary housing plan.

A rendering two of the five rows of town homes planned for the site.

The only citizen comment at the session came from Richard Gilbert of Evanston Lumber, who was worried that the developers planned to send traffic from the townhomes through the alley west of Custer onto the lumberyard property just north of the site. But he was reassured by the developers that that was not their plan.