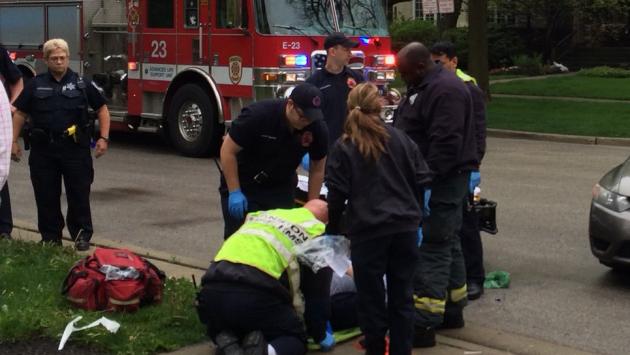 Evanston police and fire units have been called to the scene of an accident at Orrington Avenue and Haven Street just after 9 a.m. in which a bicyclist was struck by a car.

The female cyclist was knocked to the ground by the collision. The extent of her injuries isn't yet known.

Police have blocked traffic on Orrington between Garrett Place and Noyes Street.

Just last Monday a 12-year-old child riding a bike was hit by a car at Asbury Avenue and Oakton Street.

Update 9:20 a.m.: The injured cyclist has been taken by ambulance to Evanston Hospital.

Update 10:20 a.m.: The cyclist's injuries now are described as not being life-threatening.

Update 12:40 p.m.: Dugan says the driver of the car, a 50-year-old Waukegan man, was traveling westbound on Haven at Orrington in his 2006 Honda.

As he crossed Orrington to enter a driveway on the west side of the "T" intersection, the passenger side of his car collided with the cyclist, who was heading southbound on Orrington.

The cyclist, who was wearing a helmet, was thrown from her bike.

The driver of the car was cited for failure to reduce speed to avoid an accident.