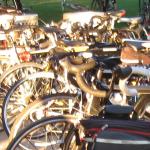 A group of bicycle enthusiasts are planning a “bike + shop” in Evanston this Friday afternoon, according to a listing posted on "the chainlink," an online website for cyclists.

“Bike Friday,” as it is called, is described as a “critical mass-type event that will be polite and respectful” as cyclists “claim our rightful place in the street.”

The event has three goals, according to a flyer promoting it:

1. Increase visibility to biking and the need for better bike infrastructure.

3. Have fun with friends and fellow bicyclists.

Cyclists interested in participating in the event are asked to gather at Sherman Avenue and Church Street, in front of Barnes & Noble, at 2 p.m.

Evanston has become somewhat of a mecca for bicyclists in the Chicago area.

Evanston received recognition for becoming the first suburban community in Chicagoland to create protected bike lanes, in addition to a recent update of the community’s bike plan.

It is the starting point for the annual North Shore Century Bike Ride, held each fall under the auspices of the Evanston Bike Club, that attracts thousands of cyclists to the city for a 100-mile bike ride through the north shore lakefront communities and as far north as Kenosha, Wis.