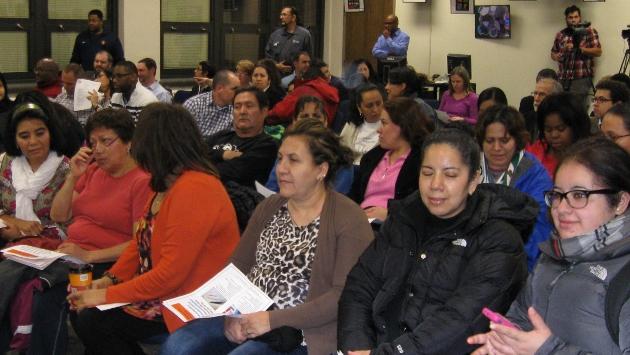 Supporters of the controversial Pacific Educational Group packed the audience for the regular November meeting of the Evanston Township High School District 202 Board Monday night and gave testimonials to the effectiveness of the group's "courageous conversations" workshops and conferences.

Member Jonathan Baum introduced the measure to the board, he said, because of disclosures that 27 teachers and administrators had attended a PEG conference in St. Louis in October, after the district had ended a contracting relationship with the organization a year ago.

Baum said he had two concerns with the group—that its approach was too narrowly focused on race while ignoring many other elements of diversity and that evidence was lacking that its efforts with the district had any measurable effect on student achievement.

Former board president Mark Metz said he was one of the attendees at the St. Louis conference and that he objected to discussing the matter of professional development at the board level.

"When we start to micromanage," he said, "we get into trouble."

Member Pat Savage-Williams, who also attended the conference, praised the content of the meeting and noted that several nearby districts had also sent large teams.

Member Scott Rochelle said the board should be concerned with how the district's goals are implemented, and he noted that "we were told flat out that PEG was being phased out." He added that he has not seen "tangible proof" that the PEG effort has been working for the district.

One of the new members of the board, Bill Geiger, said that the present board does not have sufficient information to be discussing it at this time. "Absent facts," he said, "this discussion is flawed."

Another new member, Doug Holt, said that the issue came up frequently in discussions with voters during the campaign and said that "some of it I find appalling."

Board President Gretchen Livingston said she has seen some value to the program, "but the value has decreased over time." She said that she, too, is concerned about its narrow focus on race while ignoring other issues, such as those pertaining to women.

Following the board discussion, Livingston opened the microphones to comments from the public.

More than two dozen attendees, including teachers, students, administrators, parents, and social workers, spoke on behalf of the program.

A former school principal said that "as a former administrator, I would have been thrilled to have a group of teachers volunteer to get on a bus and go to St. Louis for the confrerence."

A public librarian said she had attended a PEG workshop in Evanston and that "those two days jump-started a journey that has continued in my life."

While the present board members were not in office when the PEG contract was first discussed, a former board president, Rachel Hayman, testified that PEG was the only group with solid education experience that had responded to the district's Request for Proposal when it was seeking answers to the achievement gap between white and black students.

She found their work to be useful to the district and that, personally, "it has given me a new lens" in dealing with racial matters as a board member.

An ETHS teacher of Asian lineage said that "my work with PEG has helped me to ask different questions" when dealing with minority students from various cultural backgrounds.

At the suggestion of Rochelle, with support from Geiger, the board agreed to schedule a future session when it can receive more information about PEG and its potential for helping the district address the achievement gap issue.

PEG is on D202 Board agenda