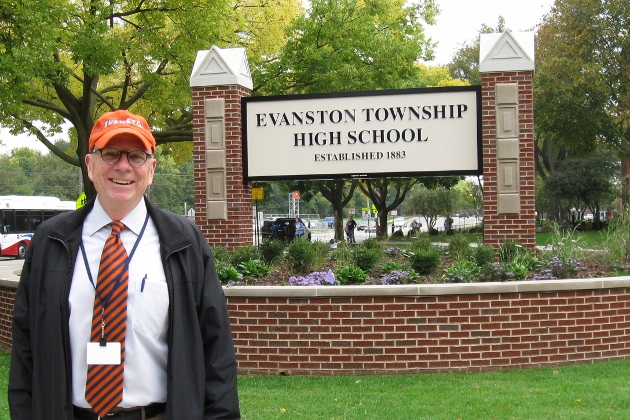 The Evanston Township High School District 202 School Board directed expressions of betrayal at the City of Evanston for its refusal to approve an intergovernmental “safe school zone” agreement that it insisted was the city’s idea in the first place.

Board President Gretchen Livingston devoted the first half hour of the board’s meeting Monday night to a recitation of events that led to the drafting of an intergovernmental agreement that was readily approved by the board at its June meeting in anticipation of quick ratification by the city.

Instead, the City Council failed to approve the agreement in August after a Human Service Committee meeting heard expressions of concern by neighbors that it might restrict their movements around their homes.

Director of Safety Sam Pattineo told the board he had discussed the matter earlier in the day with the chief of police of Champaign, Ill., who expressed surprise that the issue was controversial in Evanston.

He said they have made very few arrests in Champaign, but they have used it practically every school day since the law was passed nearly two years ago as a way to prevent violence around Central High School in that downstate Illinois community.

“It is mind-boggling to me,” Pattineo said, “that something so simple could be so difficult.”

Board member Jonathan Baum said “it’s important that we go ahead with it because it IS an agreement.”

Livingston insisted that the whole purpose of the agreement, which allows authorities to tell potential troublemakers to “move along” if they gather on the sidewalk just before afternoon dismissal time, is to prevent violence…not to make arrests.

“The best outcome,” she said, “would be to never have any violence touch our students at ETHS and to never make any arrests.”

Baum said “this back and forth is really offensive and it sends a terrible signal to the community about whether we have this joint concern about our kids. The purpose of an agreement is to show that we agree.”

Approval of the intergovernmental agreement, said Livingston, would send the message that “we don’t tolerate violence or the threat of violence in this community.”