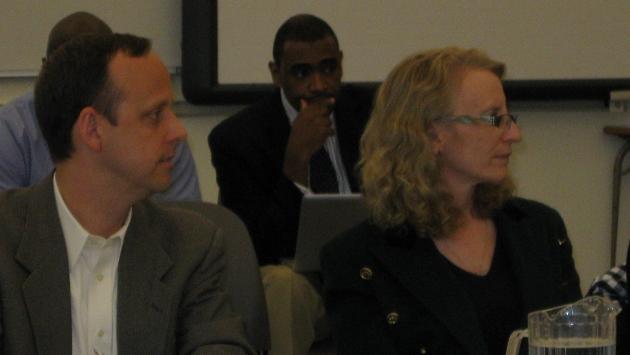 The cost of medical insurance for the employees at Evanston/Skokie School District 65 is actually going down by three percent next year, according to chief financial officer Mary Brown.

She told the board’s Finance Committee Monday night that the decline was unexpected and amounted to “almost a million dollars” in cost savings to the district.

As for the current fiscal year, revenues and expenditures are proceeding normally, she said, and the district expects to end the year close to its budgeted operating surplus of $400,000.

As for next year, much of the budgeting work is accomplished by staff during the summer, and a draft budget for the 2013-2014 fiscal year will be presented to the board in August, with final approval scheduled for September.

Brown noted that the administration earlier this year had forecast a balanced budget for FY14 and FY15 and deficits for FY16 and beyond.

Photo: Finance Committee Chairman Richard Rykhus and CFO Brown at the first Finance Committee meeting chaired by Rykhus since the April elections that resulted in a reorganization of the board with three new members replacing three that had retired. Looking on is Fred Hunter, principal of Lincolnwood Elementary School.