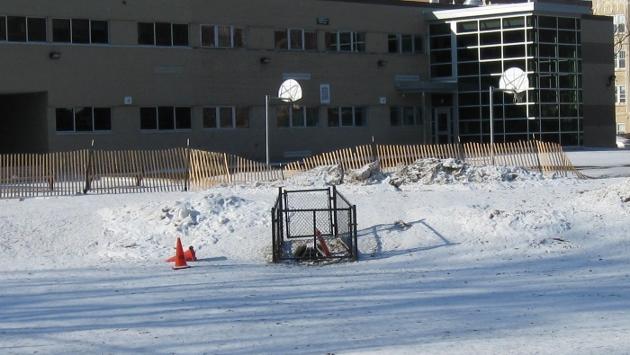 Parents of students at Evanston’s Lincoln Elementary School may learn tonight the fate of plans to restore the school’s playground from its present status as a storm water retention pond.

While it’s not an official item on the agenda of tonight’s meeting of the Evanston/Skokie District 65 School Board, the chair of the board’s Finance Committee asked the administration to give the board an update tonight on efforts to avoid delaying the work until the summer of 2016.

The state of the playground has been an issue for several years now, since expansion of the district’s fastest-growing school led to a requirement that the playground be reconstituted as a storm retention pond as part of the city’s effort to keep storm runoff from overwhelming the drainage system and backing up into residential basements.

Rather than being level with the adjacent sidewalks, the playground now dips in the center with a drain that captures rain water and holds it before being released into the city’s sewers.

Engineers came up with a plan to construct underground storage tanks to hold the water, topping them with dirt and sod to create a level playing field for the kids.

Since the original plans for the work were announced, new legislation requires that the district obtain permits from the Metropolitan Water Reclamation District (MWRD), which engineers say could take up to five months. And this would be in addition to obtaining the city permits required for such work.

Complicating the issue is the timing of the planting of sod, which cannot be done during the winter months.

So instead of doing the work this summer, the district’s consulting engineers have recommended  postponing the work until the summer of 2016.

When the delay was proposed at last week’s Finance Committee, it did not meet well with board members, who indicated that they had given parents the expectation that the work would be done this year. They even suggested that the kids could play on a dirt topping if the planting of sod had to be postponed.

So the committee referred the situation back to the administration, in hopes that they could put a little pressure on the city and the MWRD to put permit approvals on a fast track.

Finance Committee Chairman Richard Rykhus, who is facing reelection to the board this spring, asked Superintendent Paul Goren to give the full board an update at tonight’s meeting.

Top: The Lincoln School playground. Note the fenced-in storm drain in the center of the photo.