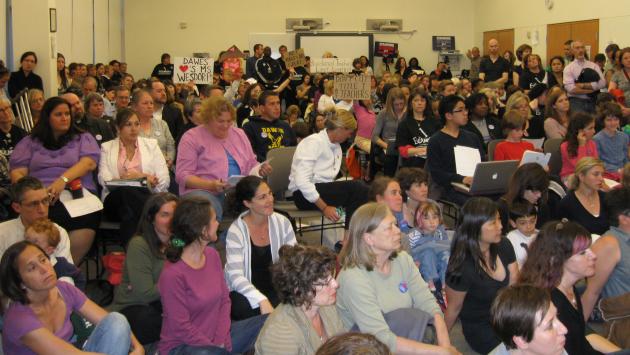 It was standing-room-only Monday night for the Evanston/Skokie District 65 School Board meeting. About 250 citizens showed up to let board members know they were dissatisfied with cuts proposed to forge a balanced budget for the next school year.

Of the 35 persons who addressed the board, 20 were parents, nine were teachers, four were students, and two were citizens expressing support for a 5th Ward school that was rejected in a referendum vote in March.

The rest of the crowd applauded, cheered, and waved signs to show they agreed with many of the statements. 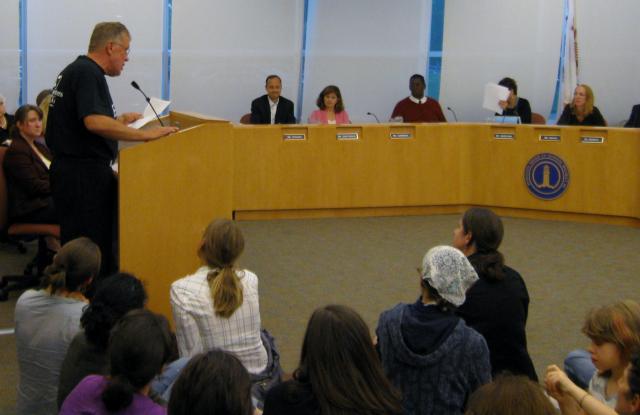 Due to the overflow crowd, some spectators found space on the floor at the front of the room.

Mostly it was a fine-arts crowd, protesting proposed budget cuts in the number of teachers who are scheduled to teach band, choral, drama, and art in the elementary and middle schools next year.

They were unwilling to accept assurances from the administration that the amount of time spent in fine arts classes would not be significantly reduced. The teachers were protesting the planning time that was being cut, particularly teachers of fine arts and physical education in the middle schools.

Many of the parents were from schools that would no longer have fulltime art teachers. In order to keep the amount of time art is taught in class, the administration is proposing that they be shifted from school to school in order to maximize their efficiency.

Typical of the parents’ reaction was that of an Orrington School parent who said that hiring multiple teachers “reduces the power of consistency” and “reduces the ability of teachers to become a true part of the faculty." 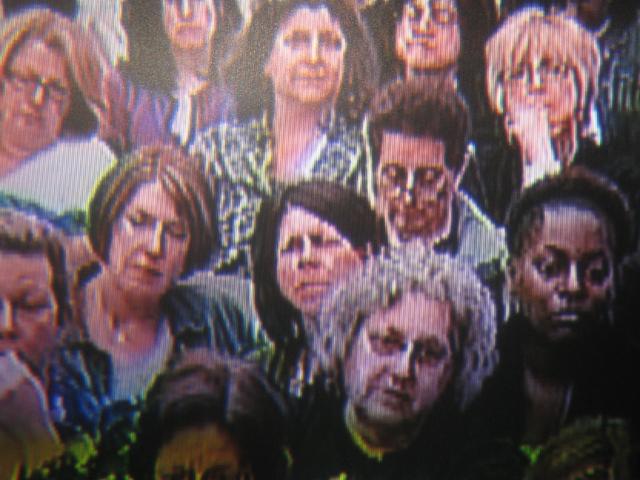 This photo, taken from the television feed,shows the looks of concern on the faces of the audience.

Physical education teachers insisted they needed sufficient planning time to set-up and take-down equipment required to do their jobs effectively.

The final speaker, an opera singer who started out poor, but found a satisfying career because of the music lessons provided by schools during her youth, ended her remarks with an operatic howl that brought down the house.

In remarks after the public comments, Board President Katie Bailey read a prepared statement from the Board that acknowledged the pain the district was going through “in these profoundly difficult economic times,” but assured the parents and teachers that they were “trying to keep any cuts as far away from the classroom as possible.”

To the teachers, she said “we know that our plans call for asking middle school teachers and fine arts and PE teachers to teach more next year,” but noted that these plans “are well within the terms of our contract.” She added: “We will continue to offer stipends for chorus, enrichment, and clubs.”

Superintendent Hardy Murphy noted that in 2002-2003, the district had to lay off about 45 teachers because it had failed to make the tough decisions earlier.

“All we’re doing here,” he said, “is trying to look way into the future so that we don’t find our backs against the wall and be faced with devastating decisions.”

Calling for patience, Murphy said “we are struggling against an economy and a state funding system that makes it very hard for school districts to operate and manage revenue streams that sometimes are sketchy at best and often come in short of what we anticipate.”

He added: “The decision and recommendations we are making are not easy ones.”

Bailey noted that the Finance Committee will be discussing budget proposals again at its June 11 meeting and the full Board in June and again in August, when it needs to take final action to meet the state-mandated September 1 deadline.