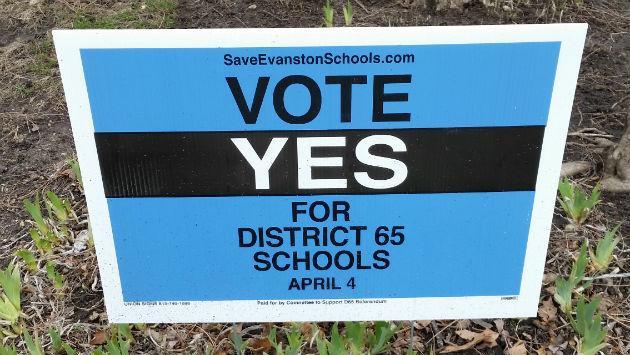 Evanston/Skokie School District 65 Superintendent Paul Goren Thursday disseminated a letter to the community, saying he is “extremely humbled and appreciative” of their show of support in approving the $14.5 million operating referendum on Tuesday by a four-to-one margin.

Goren said he wants to assure taxpayers “that the board and administration remain committed to reducing the structural deficit, exerting fiscal management, and identifying efficiencies” that include “the development and implementation of a funding policy this spring.”

The superintendent added that “we are very fortunate to live in a community that not only embraces public education, but champions the important work of our teachers, support staff, and administrators in educating the children of Evanston and Skokie.”

Now in his second year as superintendent, Goren, from the beginning of his tenure, regularly warned the board at meetings of the Finance Committee and the full board that a day of reckoning was approaching when additional funding would be required to maintain the quality of the area’s schools.

Of the eight school districts in the county with tax referenda in Tuesday’s election, only two of them recorded a “Yes” vote in excess of 60 percent., according to the Cook County clerk’s website. At 80.45 percent, the District 65 vote came out on top, followed by Northbrook/Glenview District 30 at 75.54 percent, which was a bond issue to build a new school.

Following is the text of Superintendent Goren’s letter:

“On April 4, Evanston and Skokie residents turned out in record numbers to vote on many important issues, including the $14.5 million District 65 operating referendum. According to the Cook County Clerk’s website, the referendum was overwhelmingly successful with a vote of 80.45% (YES) to 19.55% (NO).

“Thank you to all those who made their voices heard and to those who participated in the process along the way. On behalf of our School Board, I am extremely humbled and appreciative of this show of support. We are very fortunate to live in a community that not only embraces public education but champions the important work of our teachers, support staff, and administrators in educating the children of Evanston and Skokie.

“Through the successful passage of the referendum, our community has expressed confidence and a commitment to investing in our public education system. The added funding will eliminate projected deficits through 2025. As a result, all school-based referendum-related reductions and the vast majority of central operation reductions will be reinstated.

“We recognize that there were a number of people who voted both for and against the referendum and who are rightfully concerned about fiscal prudence. I want to assure our taxpayers that the Board and Administration remain committed to reducing the structural deficit, exerting effective fiscal management, and identifying efficiencies. This includes the development and implementation of a funding policy this spring.

“I can promise that we will not take for granted the community investment in our public schools. We will work to accelerate our momentum on student achievement, literacy and reading, and social and emotional learning while remaining focused on equity and equitable outcomes.

“Our team works day-in and day-out to make a difference in the lives of all students. We are committed to working together with our families and community partners and to providing regular updates on our progress.

“We are deeply grateful for the strong support of our schools. Thank you.