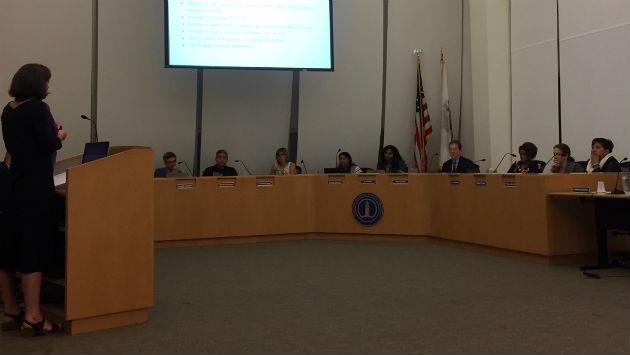 District 65 board members are in agreement. The two-way Spanish-English immersion program, or TWI as it’s known, needs to be expanded.  What they can’t agree on yet is how, or where, new strands of the program should be offered.

A lengthy report presented at Monday night’s school board meeting concludes at least two more TWI strands need to be added to the District. The report shows the classes are no longer equitably split between native Spanish speakers and native English speakers, and too many children are being turned away due to a lack of space.

A small number of residents attended the meeting. One spoke in favor of expanding the program but with a caveat.  Oakton School parent Elizabeth Powley says the school board must do a better job of ensuring African American families are given the same chance to participate in TWI as other groups.

Powley cites the district’s own statistics to illustrate what she calls a systemic problem with the lack of participation of African American families in TWI.

Powley said the inequity has been an issue since 2006.  The problem she says is exacerbated by the location of the TWI  programs, which are offered in largely Spanish-speaking neighborhoods, and the continued policy of the board giving preference to siblings of participants.

How to make the program more equitable among all students is one of the many issues to board is grappling with.

The TWI expansion has also raised concerns about busing students out of their neighborhood, staff changes and added costs. Despite all this, the expansion plan has to move quickly.  The board needs it in place by January so parents of school aged children can start planning enrollment for fall of 2018.

The board will have a preliminary discussion about how and where to expand the program at the meeting on Nov. 6.

Another meeting to discuss staff recommendations and public input is scheduled for Nov. 20.

A vote on the specifics of the TWI expansion is scheduled for Dec. 4.