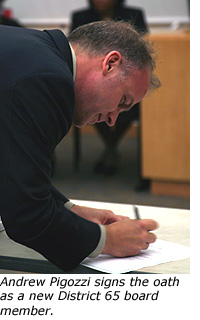 Andrew Pigozzi, who lives in Evanston and has two children in the district’s schools, accepted the position and will serve until April 2009.
The position has been vacant since Sharon Sheehan resigned citing a lack of change in the district’s policies.
"I care a lot about public education and it’s one way I felt I could continue to help the community," said Mr. Pigozzi, who ran in the last school board election.
He has worked as an architect planning schools for the last 20 years, and has even done work on Evanston Township High School.
"I respect that Andy ran for the board, he ran a campaign, he went through the election process," said Mary Erickson, board president.
"That shows a big commitment.  The second thing was I was very glad to have an architect on board.  We spend millions of dollars on our physical plan.  It would be very good to have an architect sitting on this side of the table for once."
Mr. Pigozzi’s goal is to ensure "that every child has an equal opportunity regardless of social status, race or income."
The other potential candidates were Carolyn Castellini, Zaida Cintron, Jessica Clarke, Lisa Ditkowsky, Robert Eder, David Harpool, Karen Johnson, John Osterlund, and Mindy Wallis.

Each of the ten individuals were interviewed Monday afternoon in a closed-door session. Mr. Pigozzi was selected and began his term Monday night.