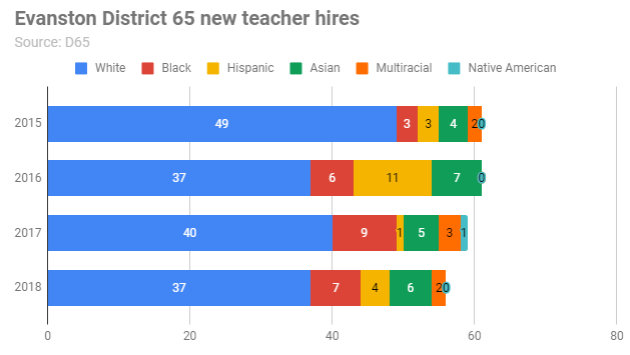 Evanston School District 65 has increased the hiring of black, Hispanic and other teachers of color over the past four years, though the racial distribution doesn’t yet match student demographics.

A report to be presented to the school board Monday says the percentage of non-white new hires has increased from 20 percent in the 2015-16 school year to 35 percent this year.

“The district’s percentages for teachers of color exceed Illinois state percentages in all racial groups,” said Beatrice Davis, assistant superintendent of human resources, with 71 percent of district teachers identifying as white compared to 83 percent of teachers across the state.

“Recognizing these demographics do not yet mirror student demographics,” she continued, “we will continue to be more strategic in our recruitment and hiring efforts.”

Achieving the goal of matching teacher and student demographics will be challenging. Nationwide, the elementary school workforce, as well as the majority of college students in teacher education programs continues to be predominantly white, as noted in “The State of Racial Diversity in the Educator Workforce,” a 2016 report from the U.S. Department of Education.

“Without question, when the majority of students in public schools are students of color and only 18 percent of our teachers are teachers of color, we have an urgent need to act,” then Education Secretary John B. King, Jr. said, speaking at Howard University in March 2016. “We’ve got to understand that all students benefit from teacher diversity.”

The district’s report indicates several strategies for increasing the number of teachers of color hired for the coming school year, including a partnership with National Louis University to “grow our own,” collaborative relationships with HBCUs and other marketing and recruitment efforts.