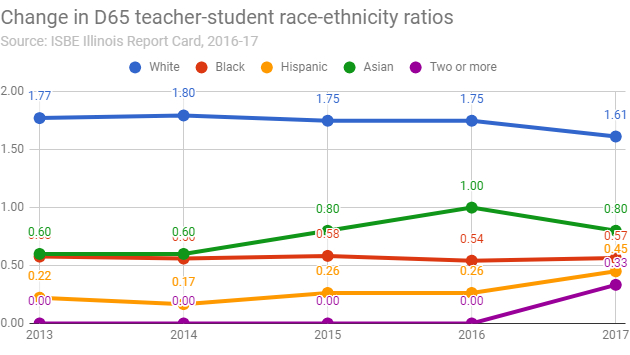 State reports show that Evanston/Skokie School District 65, under pressure from activists to increase the number of “teachers of color” on its staff, has — for the most part — done just that.

But the increased minority representation has not included black teachers.

Data from the Illinois State Board of Education shows that white teachers declined from 78 percent to 71 percent of the district’s work force over the past five years, while the percentage of white students in the schools declined from 51 to 49 percent.

It’s unclear if the dramatic increase last year in the percentage of teachers listed as multi-racial may have reflected a shift in the classification of existing staff members from one of the single-race categories.

If the teachers and student body were equally matched, all the numbers would be at 1.0. 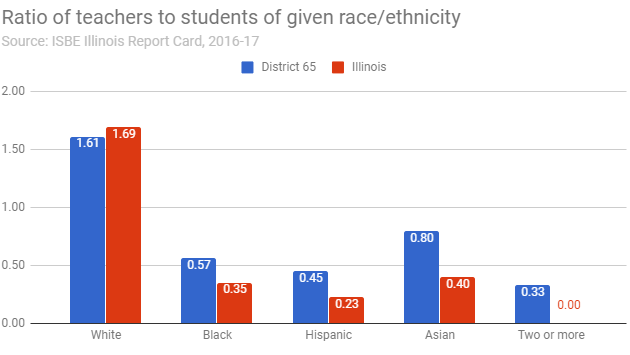 ISBE data also shows that District 65 comes closer than the statewide average to matching the race and ethnicity of its teaching staff to its student body.

Federal reports issued in 2016 and 2017 note that minorities are dramatically underrepresented in the teaching workforce nationwide.

The Organization for Positive Action and Leadership, which staged a protest last fall outside District 65 headquarters over the achievement gap for black students and called for hiring more black teachers as a means to address the issue, plans to push for the district to hire a director of black student achievement during the board’s regular meeting next Monday, Jan. 22.