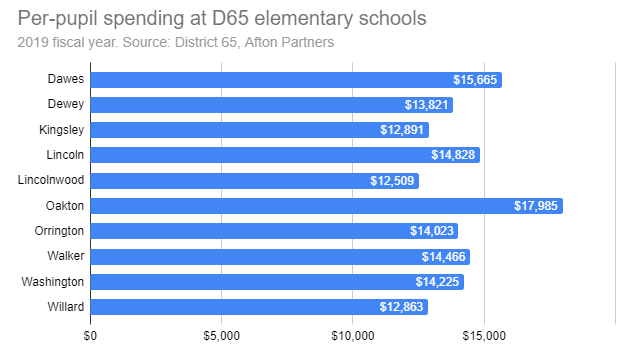 A report to the Evanston School District 65 School Board shows a $42,000 range in per pupil spending from school to school across the district, with the highest at Rice and the lowest at Lincolnwood and a $5,000 difference across the K-8 schools.

Development of a school site-based expenditure report was mandated by the federal Every Student Succeeds Act signed by President Obama in 2015. A summary of the first such report, created for the last school year in conjunction with the Illinois State Board of Education and Afton Partners, was reviewed by the board’s finance committee Monday night.

“The main premise of ESSA is equity and a belief that the students with the greatest needs deserve the greatest share of our public education resources,” said Kathy Zalewski, business manager, in a staff memo.

“As a result, financial resources are distributed equitably, but not equally.” she said. “Students and schools with greater needs are receiving a bigger share of public funding.”

Some expenses, such as debt, capital and community services, are excluded from the calculation, Zalewski said.

Per student spending varies because schools have different populations of students with special needs, English learners or low income students. School size is also a factor, since lower enrollment leads to a higher per pupil cost for fixed positions like principal or assistant principal.

Teacher salaries also vary, since the same position costs more or less based on experience. State and federal requirements may dictate a specific student/teacher ratio, such as for pre-K.

Per student spending at Rice Education Center, a therapeutic day school, is $64,056 and spending for outplaced special education students is $58,452. Expenses for pre-K students at the Early Childhood Center is $22,693. Park School was excluded from the report, but would be similar to Rice at $66,183.

The total spent at each school ranges from $11.2 million at Haven to $2.1 million at Rice.

Sunith Kartha, board president, asked if data about racial demographics could be added to the report to help the board assess progress toward equity issues.