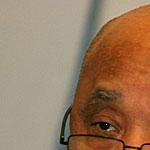 Murphy has served as superintendent for the past 13 years. The resignation is effective as of last Friday.

School Board President Tracy Quattrocki said the board “would like to thank Dr. Murphy for his 13 years of distinguished service and we wish him well in his future endeavors.

The resignation announcement came less than three weeks after the board held a closed-door meeting July 24 to evaluate the superintendent’s performance.

In years past Murphy had routinely received contract extensions from the board guaranteeing his job five years into the future, but recent elections brought new members to the board who were less supportive of his performance

But Murphy’s contract at that point still extended through mid-2015, and it was not immediately clear whether under the terms of his resignation he will collect any pay for that remaining term.

The board has started a search for an interim superintendent for this school year and will hold a closed-door meeting at 5 p.m. today on that issue, Quattrocki said,

“While we realize this is a difficult time of year for a major transition, we believe the timing is best for Dr. Murphy given the opportunities he is considering,” she added.

“The board trusts that the well-established District 65 leadership team will be very effective in facilitating the transition while the Board seeks to hire an interim superintendent. We know that clear and consistent communications are essential, and we will be working directly with the District’s leadership team until an interim superintendent is in place.  We also know that our talented and committed teachers and principals will ensure a smooth start to our upcoming school year.”

Quattrocki said the search for a permanent superintendent will start next month and that the board plans to “work hard to ensure that the community will have ample opportunity to provide input into the process before a superintendent is hired to serve our district for the next generation of students.”

They included the two-way immersion English-Spanish language program, the African-centered curriculum and alternatives to suspension.

School chief comments on his resignation