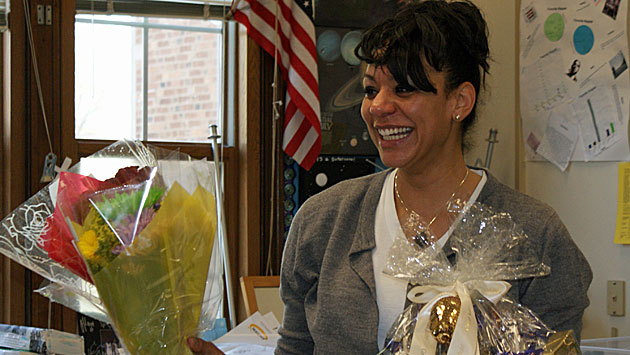 Carla Stone, a teacher at Nichols Middle School in Evanston, is one of ten winners of the 2011 Golden Apple Excellence in Teaching Award.

It's the 26th year of the award program, run by the Chicago-based Golden Apple Foundation.

The program selects teachers who exemplify the highest teaching standards and professional practices — including creating a classroom environment conducive to learning and showing commitment to students and their learning.

Sarah Mendez, the principal at Nichols, says Stone is the kind of teacher who “builds positive relationships with students and colleagues.  In her classroom, you see respect and genuine care. She also has established herself as a leader among staff, and she leads by example, dedicated to making a difference in the lives of students.”

Stone is a sixth grade math and science teacher who joined District 65 in 2000.

She grew up in Vancouver, BC, Canada where she played semi-pro basketball for the Canadian National Team, a career that ended after she suffered a knee injury. Her teaching approach focuses on teamwork and making each student a positive and efficient participant.

Superintendent Dr. Hardy Murphy said, “This is a great honor for Ms. Stone.  Our district has long appreciated her talents as a teacher and as a thoughtful, caring, and compassionate person." colleagues, and the administrators with whom she works. We congratulate her on this great recognition.”

This year Golden Apple Awards for Excellence in Teaching honor 4th through 8th grade teachers. Recipients are given a $3,000 cash prize, participate in a paid semester sabbatical at Northwestern University, and are inducted into the Golden Apple Academy of Educators.

The process for selection begins with someone submitting a nomination on behalf of the teacher from which Golden Apple screens and selects semi-finalists.  As one of this year’s 31 finalists, Stone’s colleagues, school administrators, parents, and former students were interviewed.

She also submitted to classroom observations, wrote an essay, and provided letters of recommendation during the approximately six-month long review process.