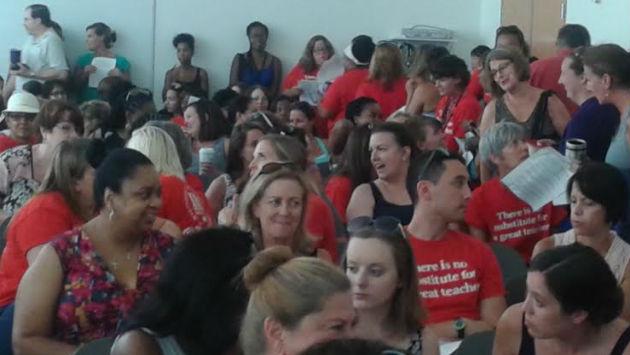 About 300 teachers packed the board room at the headquarters of the Evanston/Skokie School District 65 Wednesday and learned to their dismay that none of the district’s board members have participated so far in negotiations on a new contract.

The general membership meeting of the District 65 Educators’ Council, as the teachers union is called, was chaired by President Paula Zelinski, who delivered an update on negotiations to extend or replace the four-year contract that expires this month.

While the teachers are planning to report for work in time for school to begin as scheduled on Wednesday, August 24, Zelinski reported that her members were concerned that neither the board nor the superintendent had been directly engaged in the negotiating process, although Superintendent Paul Goren said he would be participating from now on.

The teachers had just learned that the superintendent had asked the board to freeze his compensation (base salary of $250,000) and that of his senior administrative team in light of the serious financial prospects of the district for the 2017-18 year and beyond, due in large part to property tax caps that prevent the district from keeping up with rising operating expenses.

Also, the state legislature has threatened to push obligations for teacher pensions, which are now met by the state, back to the individual districts.

Zelinski reported that most of the questions from union members pertained to working conditions and planning time, although she said teachers are trying to have a conversation about all of the issues, including “collaboration, mutual respect, as well as financial."

Update at 2 p.m.: District 65 School Board President Candance Chow released this statement about the negotiating process followed by the board and administration:

”Upon the start of negotiations, the superintendent and school board decided to follow common practice used by many school districts throughout Illinois to appoint a bargaining team and to work closely with team members throughout the process. Dr. Goren is leading planning efforts and the Board has been actively involved. In addition, Board members receive regular updates and also discuss negotiations progress at Executive Sessions."

Although the previous negotiation, in 2012, occurred before she joined the board, Chow offered this observation:

"I am confident that this time around there is a greater sense of transparency and strategic involvement by the full Board. Between regular updates by the negotiations team and ongoing discussion in Executive Sessions, we are able to provide oversight and direction as it relates to negotiation planning.

"This is extremely important given the significance of this process as it relates to both the short and long-term financial sustainability of our district. As a Board, we are committed to reaching a fair agreement that honors the hard work of our teachers and is financially sound."

No contract yet for D65 teachers

D65 board chief comments on negotiations