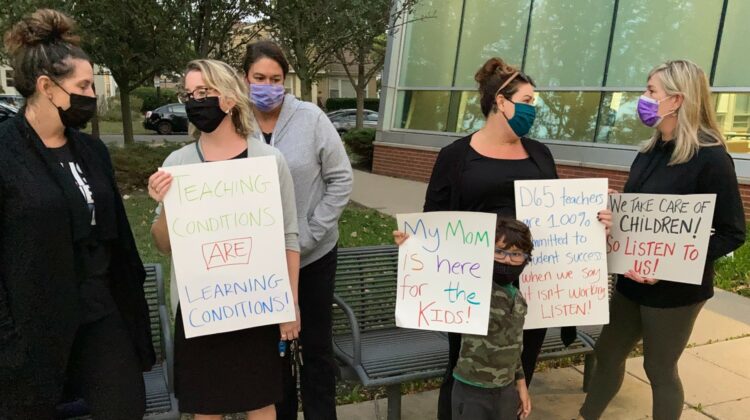 Teachers gather for a protest outside the District 65 board meeting Monday evening.

In a sharply worded series of comments, the head of the teachers union told the Board of Education Monday night that there is a “toxic work environment” in Evanston/Skokie School District 65.

Maria Barroso, president of the District Educators Council, said the union’s 800 teachers and other education professionals “returned to unfair demands and unclear COVID protocols” in the school year that began last month.

While Barroso delivered her blistering statement, more than two dozen teachers demonstrated outside the meeting, some holding signs with messages like “D65 teachers are 100% committed to student success. When we say it isn’t working LISTEN!”

Barroso said “students need to be physically and emotionally safe,” but said the union has not been included in meetings of the district’s medical advisory board.

“The lack of transparency,” she added, “is disrespectful.”

The union president also said there is an increasing workload of “many new systems that were thrust upon us.” While that workload is going well in some schools, she said, in others it is not

And she added that “asking questions is not a form of insubordination.”

Outside with the protesters, union vice-president Mike McDermott told Evanston Now “there is a huge problem with kids keeping their masks on.”

McDonald also said the teachers support many of the district’s new programs, but after so much remote learning due to COVID-19, the teachers are “stretched thin” between those new programs and just getting students used to in-person school again.

Back in the meeting, Barosso told the board that “every week a teacher approaches me on how to draft a resignation letter, because the work is not sustainable.”

Superintendent Devon Horton did not respond directly to the union president’s criticism. In fact, it is board policy that public comments are received without comment.

However, before Barroso spoke, Horton told the board that District 65 “is finishing up a really successful reopening.”

He said while there is no perfect way to reopen, the District has done its best to make the reopening as “close to normal as possible.”

Horton also said “if our practices do not change, outcomes for students won’t change. We must change and we must adapt.”

Clearly, however, there is a dispute between the administration and the teachers union on how change should be implemented.

While the meeting was going on, the protesting teachers were chanting things like “listen to a teacher’s voice.”

Inside the boardroom that chanting could be heard through the walls.