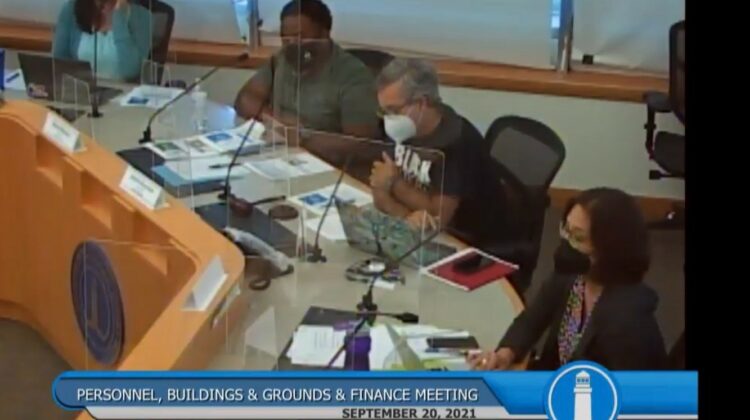 “We have a planet that needs help.” That was the message from a member of the citizen Green Team volunteers to the Evanston/Skokie District 65 school board.

The board’s finance committee heard a Green Team presentation Monday afternoon, which called for District 65’s commitment to carbon neutrality by 2050, zero waste by the same year and 100% renewable energy by 2030.

Without doing that, said another Green Team member, “we will leave a literal hot mess for our children to deal with.”

The City of Evanston already has a Climate Action plan with the same targeted schedule for carbon and waste reduction.

But meeting the projected time frame may not be easy, because going green may require a lot of green, as in money.

For example, District 65 was already looking into converting diesel-fueled school buses to electric power. But chief financial officer Raphael Obafemi told the board that the school bus contractor determined such a conversion was “not going to be financially sustainable.”

However, Obafemi also said government or private grants might be available to help pay for such a switch, so there might be a way.

“We will do our part to convert some of the buses,” he said. He also mentioned that the Head Start program is retrofitting two of its buses to electric power.

The Green Team also called for hiring a sustainability coordinator for the district, as well as funding a “curriculum which teaches environmental stewardship and climate justice in grades K-5.”

The group called for finding a new energy supplier if necessary, to reduce the amount of power generated by fossil fuels. The Green Team also said there can be savings in the long run from environmentally conscious policy decisions, such as installing solar panels on the tops of school buildings.

Dealing with climate change is a challenge for District 65 and other school systems as well. There are calls to add staff and programs, but District 65 is in a downsizing mode. While the upcoming budget is balanced, there is a projected $11 million dollar deficit in Fiscal 2026.

Superintendent Devon Horton said the district “is definitely open to applying for grants to update our buildings,” and is already meeting with Green Team members to discuss the variety of carbon reduction ideas.

Horton said that District 65 wants to plan for environmental improvements, perhaps in partnership with the City and with District 202, and also expects that more D65 schools will add a composting program to reduce food waste. Eleven Evanston/Skokie school buildings, more than half the total, had composting before the COVID pandemic forced students into remote learning.

Environmental activists see composting as having two purposes. First, it reduces waste. But second, it teaches children the value of taking care of the planet. As one Green Team member put it, “small actions can empower” bigger ones.